TORONTO -- Ontario's high school teachers' union says its members are upset that local school boards are dragging their feet on finalizing their new agreement with the province, but says the delay won't impact students returning to class next month.

Only eight of the more than 40 school boards in the province have so far implemented the contract, Paul Elliott, the new president of the Ontario Secondary Schools Teachers' Federation, said Thursday.

"That cloud is there right now. It would be nice for that cloud to be gone and then we could all move forward," Elliott told reporters in Toronto after making his first major speech to union leaders.

"As the year progresses and this goes on, it's going to be difficult for them to have any trust in their own employer."

Elliott said the union is puzzled as to why the deals aren't in place when the boards "have an opportunity to ensure there is peace and stability in the schools."

He said if the boards have not nailed down the contracts by next month, the Ministry of Education should step in.

Education Minister Liz Sandals said she expects the boards will confirm by the end of this month that the deals will be in place by Sept. 30, adding $160 million in funding has been made available to help them along.

"We know that all of our partners in the education sector have an interest in starting the school year on a positive note," she said in a statement.

Elliot said most of his union's 60,000 teachers will be returning to extracurricular activities, adding the union recommends they continue to do so even if their contracts aren't fully in place.

However, he said the union may target school board meetings with "information picket" rallies and send them letters and protest emails, urging them to speed up the process.

The agreement the OSSTF reached with the province in April says the government will make "best efforts" to ensure bargaining with local boards is done by June 28. The deal with the Elementary Teachers' Federation of Ontario has an Aug. 29 deadline.

A spokesperson with the ETFO said only that they continue to work with school boards to finish the deal.

Both unions signed the agreements after months of labour disruption that saw many teachers stop participating in extracurriculars to protest Bill 115, which allowed the government to ban strikes and imposed contracts with a two-year wage freeze.

New contract talks will start in 2014 as the existing deals, which apply retroactively, expire next August.

ETFO president Sam Hammond said his union's 76,000 members are eager to get back to classrooms with students next month, and for schools to keep operating smoothly when all sides gear up for new bargaining.

"None of us, absolutely none of us... want to go through a year like we had last year," said Hammond, who was re-elected Monday.

Speaking in Toronto on the last day of his union's annual meeting, Hammond was optimistic a new deal will be reached next year without another round of labour disruption.

But he cautioned ETFO will again be a "force to be reckoned with" if their democratic rights are attacked during the coming round of bargaining -- a reference to the now-rescinded Bill 115.

OSSTF's Elliott said his union will enter talks with the province "with an open mind."

Premier Kathleen Wynne said the province has made great strides in mending its ties with teachers.

"I think that we have gone some way to re-establishing a good working relationship and we will continue to work on that," she said. "But remember, it's important that the government and the people who are working with our children are on the same page." 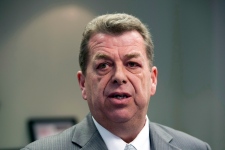