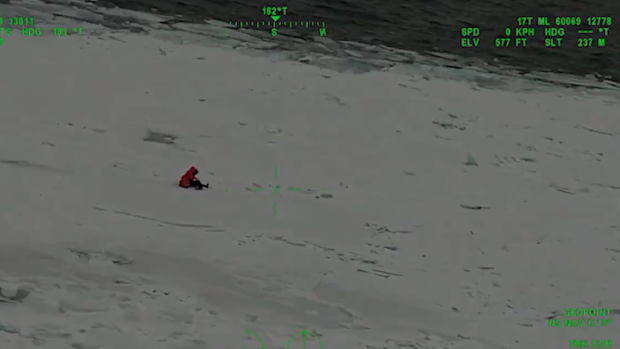 Two hikers were trapped on an ice floe near Tobermory on Sunday afternoon. (Twitter/ OPP_WR)

Two hikers stranded on an ice floe that broke away from the shore of Georgian Bay near Tobermory drifted for about three kilometres before they were rescued by an OPP helicopter on Sunday afternoon.

The two hikers were out walking near the grotto at Bruce Peninsula National Park when the ice they were standing on detached from the shoreline.

The incident was reported to police by another person out hiking in the area.

“There are some people out on the ice,” the caller can be heard saying in a video posted by police on Twitter.

“I guess they walked out there and now there is a huge separation of water between them and the mainland and they need help. They better hurry. This is getting wider and wider as we speak.”

In the video, the two hikers can be seen sitting on the ice floe as they wait to be rescued.

Two hikers near Tobermory had to be rescued from an ice floe, which sheared away from shore yesterday. OPP West Region wish to thank @JRCCTrentCCCOS and our local partners in Grey Bruce for their help in this operation. Some video courtesy the JRCC. ^dr pic.twitter.com/7BvYEgdRDe

“We were kind of panicking because the water came in so fast,” one of the hikers tells the OPP Provincial Communications Centre.

“We didn’t know what to do so we were kind of looking around us and realized how fast it was filling in between the shore and us and then we knew we needed help.”

Police say a Royal Canadian Air Force C-130 Hercules plan from the Joint Rescue Coordination Centre in Trenton was deployed to the area and directed an OPP helicopter to the site where the hikers were trapped.

The hikers were found in good health and transported to Tobermory Airport.