Homeless encampment in Kitchener, Ont., allowed to stay — for now 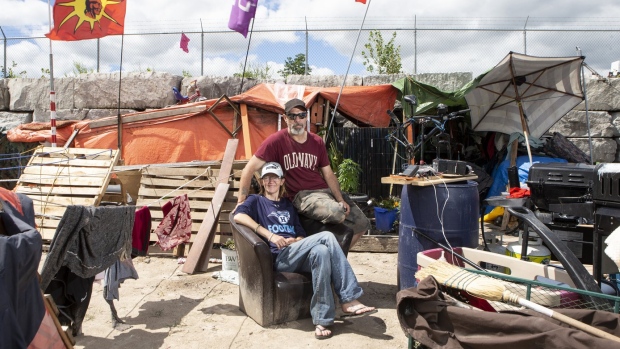 Will House and Jen Draper are photographed outside their home at a large homeless encampment, in Kitchener, Ont., on Monday June 27, 2022. THE CANADIAN PRESS/Chris Young

Relief washed over the residents of a large homeless encampment in Kitchener, Ont., this week after the community of more than 40 people learned it would be allowed to stay — though it's not clear for how long.

The Region of Waterloo, which owns the land where the encampment is located, said it won't forcibly clear the collection of tents in the city's downtown, but instead plans to turn to the courts to make those living there leave.

The region had put up eviction notices on June 6, warning residents to be gone by Thursday, at which point they would be deemed to be trespassing.

Some of the residents said they worried there would be a repeat of what happened in Toronto last summer, when violence erupted as police moved to forcibly tear down similar encampments.

The reprieve is "really good news," said Jenn Draper, who has been living at the site with her partner, Will House, since December.

"I feel good, but they say they have to seek legal counsel, so I'm not sure what that means."

The Region of Waterloo said it will be taking legal action if residents are not gone by Thursday.

Regional chair Karen Redman told The Canadian Press the region will not forcibly evict the residents from the encampment but will file an application with the Ontario Superior Court of Justice if they don't leave its property.

"We wanted them to know we were serious, but it's always been our intention to go to court and the court process will allow all parties to air what they think is the preferred way forward," she said.

Redman said while space in shelters and motels are tight, there is room for those living at the encampment.

Since 2021, 508 people have transitioned from homelessness to permanent housing, 190 households at risk of being evicted stayed in their homes with rent-arrears funding and 2,626 households avoided shelter stays through the regions' housing prevention and diversion program, she said.

There are currently about 1,000 people living on the streets in the region, Redman said, adding they have offered the residents of the encampment a spot somewhere inside.

Advocates, however, argue there isn't as much space as the region says, pointing to a nearby space in a church that recently shut down.

"It's just moving the deck chairs around," said Michelle Mortansen of the outreach group GoingMobileKW.

And some in the encampment, including Draper and House, say they have never been approached by the region regarding shelter.

"I'd take a motel room if they offered it," House said. "It would be nice to have my own bathroom."

The couple were the first to arrive at the site in December. They became homeless in May 2021 after they had a falling out with a friend from whom they were renting a room.

Since then, they've been in and out of shelters, lived on the streets for a few months and in the bush for a few weeks, they said.

They ended up outside a soup kitchen in early December. But that also didn't last, which is when they moved onto the land across the street, they said.

House, who has been unable to work for years after he broke his back, helped build a makeshift home.

The top is covered by a heavy-duty masonry tarp insulated by blankets set against a retaining wall made of large stones. Inside is a bed and a couch and a "walk-in closet" that is more like a crawl space.

In March, a few others showed up and pitched tents, the pair said. Soon after, it ballooned from a few tents to 20, Draper said.

Over the last several months, they've managed to build a community where they look out for each other, she said.

There are several dining tables, lounge chairs, barbecues and a donation table for outreach workers who come by day and night with food, medicine and clothes.

"A lot of us don't have families or their families have turned their backs on us, but we've found one here," Draper said.

"So I think we've created that feeling when you walk out the door to go somewhere, you know that somebody cares that you come back."

Britney O'Donnell has lived at the encampment the past month. She's lived through violence at shelters and routinely had her belongings stolen. "It's much better here, no one steals my stuff," she said.

O'Donnell, who previously worked as a nurse, has three children. One day, when her youngest daughter was two years old, her partner gave her a Percocet, an opioid painkiller, she said.

"I felt like super mom," she said. "I could get down and play for hours with my daughter and the house was clean, like spotless."

She started taking OxyContin, another opioid painkiller, and eventually, fentanyl, she said.

"I was so dumb and naive and I feel so stupid," the 37-year-old said through tears. "I miss my kids. I want to get clean, but it's so hard to find treatment."

O'Donnell said she's terrified of shelters and has no idea where she'll go if the region forces her out.

Redman, the regional chair, said the region initially allowed the encampment, as long as it didn't get too big.

It crossed that threshold in early June, growing to nearly 60 people, Redman said. There were also concerns for safety, criminal activity and the health of the residents, she said.

Kitchener Mayor Berry Vrbanovic said the homeless situation is dire and they desperately need the province to help.

"What's key here is that we need a plan that provides reasonable and meaningful alternatives for the residents," he said. "It's reached a crisis point."

The issue has prompted the Ontario Big City Mayors -- 29 mayors with a population of 100,000 residents or more -- to request an emergency meeting with Premier Doug Ford to "address the chronic homelessness, mental health, safety and addictions crisis overwhelming our communities."

The premier's office did not return several requests for comment.