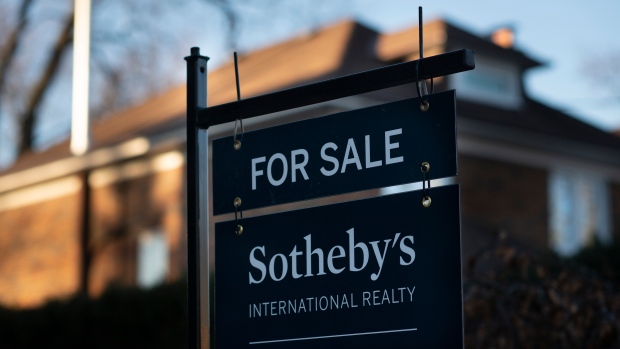 OTTAWA - Buying a home has become more unaffordable for Canadians even as housing prices fall, according to new reports from the parliamentary budget officer and RBC.

The PBO's house price assessment, published on Thursday, says the cost of the average house is 67 per cent higher than what the average household can afford - and RBC's own report says the median household would need to spend 60 per cent of its income on ownership costs.

That's despite a seven per cent decline in housing prices from February to August this year.

According to the budget officer, the average national home price in February was more than 50 per cent higher than it was two years before.

But with interest rates on the rise, buying a home remains highly unaffordable for the average household, the assessment says.

Using a methodology developed by the International Monetary Fund that examines household borrowing capacity and the ability to purchase a home in select Canadian cities, the PBO says a house considered affordable for an average household in August would cost $464,952.

The national average home price was 67 per cent higher.

The gap has gotten larger since December 2021, when the national average house price was about 45 per cent more expensive than what an average household could afford, according to the budget officer.

The RBC report, also published Thursday, says buying a home has never been this unaffordable, per its own affordability measures.

RBC says the median Canadian household would need to spend 60 per cent of its income to cover ownership costs. For those who live in Toronto and Vancouver, the figure balloons to 83 per cent and 90 per cent, respectively.

Both RBC and budget officer Yves Giroux attribute the worsening of the situation to higher mortgage costs, as the Bank of Canada aggressively raises interest rates to cool high inflation.

Since March, the central bank has hiked its key interest rate by three percentage points. Its key rate currently sits at 3.25 per cent and another interest rate hike is expected in October.

The rate hikes are feeding into higher borrowing costs for those seeking a mortgage and, in turn, a slowdown in the housing market.

“The Bank of Canada's rate hiking campaign since March has added hundreds of dollars to mortgage payments that come with a home purchase,” the RBC report says.

“The good news is the widespread market downturn is setting the stage for some affordability improvement down the road,” the report says.

Based on scenarios the PBO constructed to gauge where housing prices are headed, prices could decline by 12 to 23 per cent by the end of the year from the peak reached in the winter.