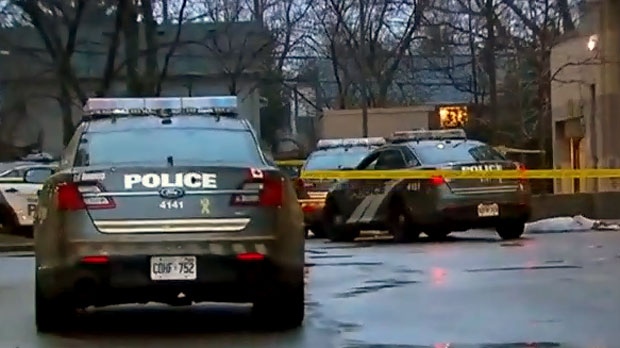 Toronto police are seen investigating the death of a man and a woman at an apartment building in the city's Scarborough Junction neighbourhood on Jan. 8, 2019.

Homicide investigators have now taken over the case of a 40-year-old man and 30-year-old woman found dead at an apartment building in the city’s Scarborough Junction neighbourhood on Tuesday afternoon.

Emergency crews were called to the eighth floor of a building located at 544 Birchmount Road, south of St. Clair Avenue East, at around 2 p.m. for a report of unknown trouble.

The man and woman were pronounced dead at the scene, police said.

The identities of the deceased have not been released and their relationship is not yet known.

On Wednesday, homicide detectives confirmed they had taken over the investigation and said there are no outstanding suspects wanted in connection with the case.

Post-mortem examinations have been scheduled for Thursday.