Hope for a good summer with one dose in arms, if we 'crush' COVID-19: Trudeau 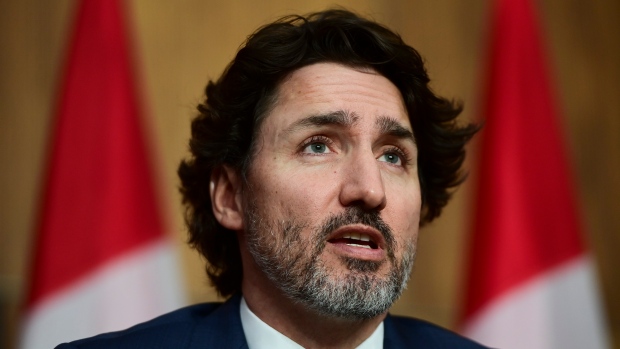 OTTAWA - Prime Minister Justin Trudeau says Canadians can be hopeful for a summer of backyard barbecues and park picnics but only if we get more vaccinations into arms and don't ease public health restrictions until “cases are way down.”

“We all want to have a summer where we can see our loved ones and invite friends over for barbecues,” Trudeau told a news conference in Ottawa on Tuesday.

Canada should have enough doses to hit that target by mid-June.

“This is, I hope, our final challenge,” said Tam. “If we can keep on suppressing the cases and get the vaccines up, we will have a year that looks considerably better moving head.”

What's becoming clear is that very few Canadians going forward will be getting the Oxford-AstraZeneca vaccine, with almost no doses left of the 2.3 million shipped to date, only 1.6 million coming in the next eight weeks, and enough Pfizer and Moderna to more than cover the Canadians yet to be vaccinated.

More than two million Canadians have received AstraZeneca and 17 have been confirmed to have VITT. Three women have died.

Sharma said in an interview “it's something we're constantly looking at” but whether and how the vaccine is used will depend on local situations, including other options available.

Ontario said Tuesday it is pausing AstraZeneca entirely with confirmed VITT cases reported in the province jumping to eight from three last week.

The province's chief public health officer, Dr. David Williams, said Ontario will also be looking at what to do about second doses, including whether to offer a different vaccine.

Saskatchewan said it has stopped using AstraZeneca for first doses as there's little of it left in the province.

“We're not going to have a Trudeau summer here in Saskatchewan. We're going to have a one-dose spring and quite likely a two-dose summer, as we are planning to have second doses available to everyone in the province by sometime in the middle of July.”

Alberta and British Columbia said they are keeping remaining AstraZeneca supply largely for second doses for people who already got it, or for those who can't get Pfizer-BioNTech or Moderna because of allergies.

A B.C. Health Ministry spokeswoman said AstraZeneca accounts for 10 per cent of the province's vaccinations to date and helped when the province had its highest case rates and limited supplies of Pfizer and Moderna.

Manitoba isn't adjusting its vaccination program but said it has 8,000 doses of AstraZeneca left with no knowledge of when it will get more.

Quebec public health director Dr. Horacio Arruda said the province has almost no AstraZeneca left, and is awaiting guidance from the provincial immunization committee to decide how to handle second doses for recipients of the vaccine.

“We will evaluate the situation and, as I've always said, we will make sure that people have informed consent with the vaccine, we will not give them a vaccine that they don't want, that they're not informed about and we will offer the best combination to protect Quebecers while being safe.”

Every province is eagerly anticipating results of a British study on mixing and matching vaccines. Data could come on AstraZeneca and Pfizer as early as this week, with many health experts expecting very positive results from combining two different vaccines.

“That would offer a choice essentially, for those who have received AstraZeneca for the first dose,” said Tam.

However, she said, the advice remains to give the same vaccine for second doses and Canada will ensure there are enough doses of AstraZeneca to give a second dose to the more than two million Canadians who got it as their first. Canada bought almost 24 million doses of the vaccine, with most to arrive by the end of September.

Vaccines are critical to slowing the spread of COVID-19, but Tam and Trudeau stressed we also have to keep public health measures in place long enough to let vaccines take effect.

“We've seen from waves in the past the problems that happen if restrictions are opened too early, it just leads to a greater next wave,” said Trudeau.

There are still pockets of Canada where COVID-19 is not in control, including much of Alberta and Manitoba. Both provinces implemented new restrictions this week, including school closures and limits on public gatherings, but neither are in a full lockdown.

Quebec and Ontario reported their lowest case counts since March - Quebec with 660 new cases and Ontario with 2,073. Both have seen declines in hospitalizations, including intensive care patients, in the last two weeks.

- With files from Steve Lambert in Winnipeg, Terri Theodore in Vancouver and Julia Peterson in Saskatoon