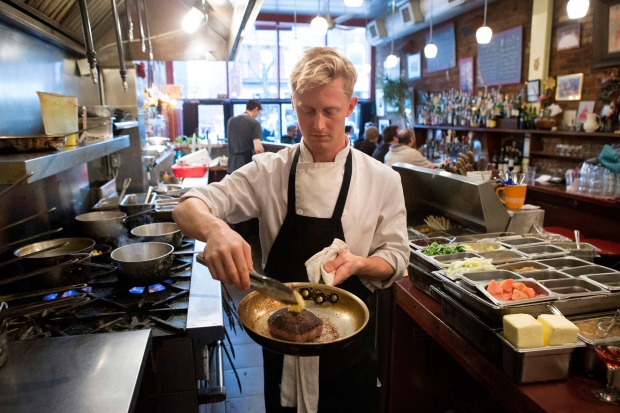 TORONTO -- Horse meat found lurking in beef products in Europe has some meat eaters worried about what's on their dinner plate, but not Filomena Lorusso -- she knows it's all horse, of course.

Lorusso, the owner of Toronto deli Cavallino Carne Equina and Groceries, feels so strongly about horse meat, it's not just the only type of meat she sells, it's the only kind of meat she eats.

Lorusso's customers are mainly of French, Italian and Russian backgrounds, she says, but she has seen all types of people purchase horse meat.

"Any way you eat beef, we eat horse," she says. "Sandwiches? Yes. Barbecue? Yes. Every way."

Shamez Amlani, owner of La Palette on Queen Street in Toronto, says horse meat is not as popular here as it is in France, where he lived for several years, but it is delicious.

"It tastes like beef -- a little sweeter, and more tender," he says. "Don't cook it beyond medium rare."

La Palette serves horse tenderloin in two ways on their menu. Both options are $35, the most expensive entrees on the menu (along with the bouillabaisse) but Amlani says their horse meat is flavourful, lean, and definitely popular.

"We want to serve European food and so when I found a source in Quebec that had nice horse tenderloin, we jumped on it," he says.

"I'd say at least one in 10 diners end up trying it. In foodie culture, people love to try things they haven't had before. Being at the top of the food chain and a meat eater, why deny yourself something healthy and tasty?"

But he agrees it's not for everyone. Definitely not for Kyle Boult, a financial analyst who lives downtown Toronto.

"I personally think eating horse meat is gross," he says. "It's not what we know. I've also heard it's very tough."

Canada has become a major international horse meat supplier since a U.S. federal court ruling in 2007 closed the last horse-processing plant in that country.

In January 2011 -- when it was reported that 100,000 live horses imported from the U.S. were slaughtered in Canada each year -- the consumption of horse meat became a national issue of ethics. Although its sourcing is still an issue, the debate has shifted to issues of personal taste.

Horse meat is eaten in a number of countries, including France, Russia, Kazakhstan, China and Italy. But the latest horse meat scandal in Europe has angered many meat eaters, especially in the U.K., where eating animals considered as pets is taboo.

"It now seems to completely be a cultural thing," says Mark Schatzker, an award-winning food and travel writer and author of the book "Steak."

"I've spoken to Temple Grandin (a humane slaughter expert), who is sort of the ultimate authority in my mind, and she says if the slaughter is done properly, there's no difference from a humane point of view between horse meat and beef."

Schatzker also says that while detractors of eating horse say slaughtering horses is cruel, their intentions often cause more harm if they can't offer an alternative solution.

"They got rid of horse slaughters in the States, and people didn't have anything to do with their horses once they got old," he says.

"They're a terribly expensive animal to keep, so they were releasing them into parks and dumping them into other people's barns and stuff. It turned into a crisis."

Dr. Melanie Joy, a Harvard psychologist and author of "Why We Eat Pigs, Love Dogs and Wear Cows," has spent 20 years studying the issue of why some people consider it OK to eat some animals but not others. She agrees people's aversions to horse meat have absolutely nothing to do with the animal.

"We haven't been socialized for disconnect with horses," Joy says over the phone from her home in Cambridge, Mass. "Animals like monkeys or gorillas we see as beings, for example, not food. It's the difference between eating someone, not something."

Joy, who doesn't eat meat at all, says that if the food scandal in Europe had instead been that chicken was being replaced with turkey, the story wouldn't be getting as much attention.

"People tend to think it's only vegans and vegetarians that bring their views to the dinner table, but by saying it's OK to eat beef and gross to eat horse -- you're doing the exact same thing," she says.