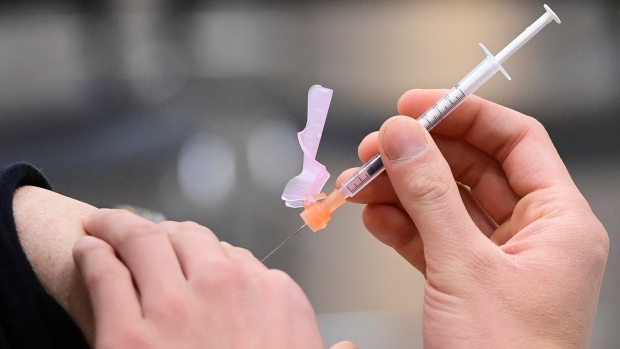 Johnson & Johnson's single-dose COVID-19 vaccine has hit a stumbling block in the United States as regulators begin investigating reports of blood clots, weeks before the first shipment of the jabs are expected to arrive in Canada.

The U.S. Centers for Disease Control and Prevention and the Food and Drug Administration said Tuesday they were investigating clots in six women that occurred in the days after vaccination. The agencies are recommending pausing the use of the Johnson & Johnson jab in the country.

It's the second COVID vaccine to be investigated for a possible link to blood clotting after several European countries temporarily halted use of the Oxford-AstraZeneca vaccine for the same reason last month.

Canada approved the Johnson & Johnson vaccine in early March, but manufacturing issues have delayed shipments. The country is scheduled to get its first batch at the end of this month.

Johnson & Johnson said Tuesday it was delaying rolling out its vaccine in Europe amid the U.S. investigation.

The reports from Johnson & Johnson recipients appear similar to the rare type of clotting disorder that European authorities said last week is possibly linked to AstraZeneca. The European Medicines Agency has said the benefits of receiving the AstraZeneca jab outweigh the potential risks.

More than 6.8 million doses of the Johnson & Johnson vaccine have been administered in the U.S., with the vast majority reporting no or mild side effects.

Both Johnson & Johnson and AstraZeneca use the same vaccine technology, which differs from the mRNA vaccines from Pfizer-BioNTech and Moderna.

Here's how the four vaccines work:

All of the approved COVID-19 vaccines train the body to recognize the spike protein that coats the outer surface of the coronavirus.

Johnson & Johnson and AstraZeneca use a harmless version of a cold virus as a vector to give our cells the instructions they need to make the coronavirus's spike protein.

The immune system recognizes the protein and makes antibodies, which then allow us to fend off attack if exposed in the future.

Johnson & Johnson uses a human adenovirus, or a cold virus, to create its vaccine while AstraZeneca uses a chimpanzee version.

Experts say it takes a couple weeks for the body to build up some level of immunity with any of the vaccines.

Moderna and Pfizer use messenger RNA (mRNA), a novel technology that essentially teaches our cells how to produce the coronavirus's spike protein. That triggers an immune response if we become infected with the virus in the future.

All four of the vaccines basically work the same way, but there's one less component involved with the mRNA versions. Whereas the viral vectors use another virus to give our cells the info they need to make the spike protein, mRNA dumps the genetic code in directly, without using another virus as a vessel.

Pfizer and Moderna use synthetically-produced mRNA that's packaged in a fat coating. The mRNA is dumped into the cell when the vaccine is injected into the arm muscle and it then translated into protein to make the antibody.

The vaccines from Pfizer and Moderna were the first inoculations approved for humans to use mRNA, but the technology was being worked on for decades before it was adapted to vaccine creation.

Previous research had been done on creating mRNA vaccines against Zika and other viruses, and there were earlier efforts focused on cancer treatments.

Early pitfalls against the mRNA technology was that it was too unstable and fragile, with the mRNA disintegrating upon entering the body. That problem was solved by packaging it in the fat coating, giving it something to help bind onto cells easier.

This report by The Canadian Press was first published April 13, 2021.