How much protection is offered by one dose of a COVID-19 vaccine? 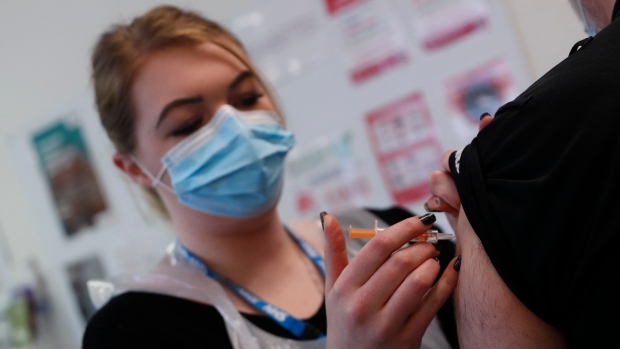 As COVID-19 vaccines continue to reach more and more Canadians, some are wondering what level of protection they're getting from their first dose, and what happens while they're waiting for the top-up jab.

The Canadian Press asked Dr. Lynora Saxinger, an infectious disease expert with the University of Alberta, and Kelly Grindrod, an associate professor at the University of Waterloo's School of Pharmacy, those vaccine questions.

WHAT PROTECTION IS OFFERED BY THE FIRST DOSE OF A TWO-DOSE VACCINE?

All of the approved vaccines prevented COVID-related hospitalization and death in their clinical trials, and Saxinger says that's reflected in the real world now.

Real-world data also shows the first dose offers strong protection, providing around 80 per cent effectiveness against severe disease within a month, she adds.

“It certainly does not make you bulletproof but the weight of the literature suggests that from two or three weeks after your first dose, if you're going to get COVID it's going to be a lot more like cold,” Saxinger says. “And converting COVID to a cold is OK.”

WHAT HAPPENS TO THAT PROTECTION WHILE WE WAIT FOR A SECOND DOSE?

Experts say the protection offered by the first dose seems to improve as the weeks go on, but they're not sure when it starts to wane.

Saxinger says the mRNA vaccines from Pfizer-BioNTech and Moderna seem to offer higher levels of protection at a quicker pace, while the viral-vector based vaccine from Oxford-AstraZeneca starts slower but continues to improve over time.

Grindrod says high levels of protection start to be seen about two weeks after the initial dose, and protection improves to nearly “full benefit” of the first shot by the one-month mark.

“And then what we've seen with the second dose is that tops it up to 90-plus per cent protection,” she says.

The National Advisory Committee on Immunization recommends provinces space out first and second doses by to up to four months, depending on supply, in order to give more Canadians partial protection faster.

The recommendation caused concern when it was first put forward in March, but Grindrod says the ideal interval was never set in stone. Doses were spaced out three to four weeks apart in clinical trials, partly to get results quicker, she adds.

Grindrod says there are different ways to measure longer-term protection, including by looking at antibody levels and trying to capture T-cell responses. But she says the rate of hospitalization and death within a population is perhaps a better indicator that vaccines are working.

“When you look at large populations ... what is the rate of hospitalizations in people who are vaccinated versus not vaccinated?” she says. “We know you have a pretty good response after that first dose, and you should maintain a lot of that benefit for at least a few months.”

WHAT HAPPENS IF I GET THE VIRUS WHILE MY BODY IS BUILDING IMMUNITY?

Saxinger says there have been some cases where people have been infected with the novel coronavirus in the week or two after getting their first dose of a vaccine.

She says that could mean an individual was either incubating the virus at the time they got their shot, or their body hadn't built up enough immunity to recognize the pathogen and block it out.

“You have to have time to make the antibodies,” she says.

While Saxinger notes it's possible the virus could be weakened by whatever immune response emerges in the days after vaccination, she says that hasn't been studied extensively.

While some studies suggest vaccinated people are also less likely to spread the virus to others, Saxinger says there's still “not a lot of good evidence in that arena.”

She says that's likely the main reason public health officials urge caution even among those who have already been vaccinated, as parts of Canada see skyrocketing levels of community transmission.

Grindrod says data from Moderna seemed to suggest there was less viral load in those who became infected after vaccination.

“We really don't know if these vaccines protect us against being contagious,” she says. “So until you have most people relatively protected against COVID, you still have a question of potential contagious infection.”

This report by The Canadian Press was first published April 28, 2021.