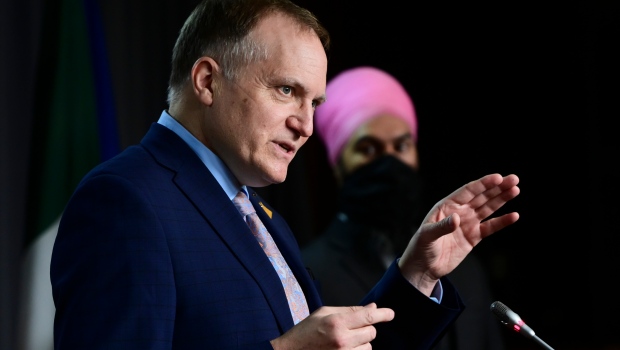 OTTAWA - Conservatives say they disagree with a committee of MPs deciding that only fully vaccinated MPs, staff and visitors can enter the House of Commons.

Their objection represents the first challenge to Tuesday's ruling by the all-party board of internal economy - the governing body of the Commons - that only people who are double vaccinated will be allowed to enter the precinct.

The Liberals, NDP and Bloc Quebecois agree that members of Parliament should be fully vaccinated to take their seat, making it a rule for their candidates who ran in the recent federal election.

Conservative Leader Erin O'Toole did not, saying that while he encourages vaccinations, he respects people's individual health choices.

In a statement, Conservative whip Blake Richards said the Tories believe that a negative result from a rapid COVID-19 test can assure that a workplace is safe.

Richards is one of two Tory MPs who sit on the nine-member board of internal economy. He said he couldn't discuss what happened behind closed doors, but his statement suggested both Conservative MPs opposed the measure.

“While we encourage everyone who can be vaccinated to get vaccinated, we cannot agree to seven MPs, meeting in secret, deciding which of the 338 MPs, just elected by Canadians, can enter the House of Commons to represent their constituents,” he said Wednesday.

O'Toole, who is vaccinated, has yet to say how many of his 118 elected members are fully immunized against COVID-19.

An analysis by The Canadian Press shows at least 79 Tory MPs are vaccinated, with two MPs saying they cannot due to medical reasons and a third who reported being partially vaccinated with the intention to book a second shot.

Re-elected Conservative MP Rachael Harder from Alberta posted a photo of Canada's Parliament building on Instagram on Wednesday with text saying “freedom is â€¦. the ability to hold one's own beliefs without damnation.”

The cross-party board of internal economy has the authority to make decisions about the administration of the House of Commons, even when Parliament is not sitting, under the Parliament of Canada Act.

Heather Bradley, director of communications for the Commons Speaker, said the board has “full authority” and “a mandate” to make such decisions.

The issue was front and centre Wednesday as Prime Minister Justin Trudeau continued consulting with opposition leaders about how the House of Commons should resume work and what the priorities should be once it is back in operation.

He spoke separately with O'Toole, NDP Leader Jagmeet Singh and the parliamentary leader of the Greens, Elizabeth May, after speaking with Bloc Quebecois Leader Yves-Francois Blanchet on Tuesday.

In a readout provided by the Conservatives, O'Toole said he asked Trudeau during their call to “stop using vaccines as a political wedge tool and to prioritize addressing the issue of vaccine hesitancy in Canada.”

He said he told Trudeau the Conservatives would put forward ideas to reduce and address vaccine hesitancy in the coming weeks.

He asked the prime minister to recall Parliament immediately, and to end the Canada recovery benefit, set up to help people during the pandemic, on Nov. 20. The readout said Trudeau “did not answer.”

In its own statement about the call, Trudeau's office said the prime minister stressed the need for all MPs to be fully vaccinated in the House of Commons.

Following his conversation with Trudeau, Singh said “there's no question” requiring MPs to be fully vaccinated to be in the Commons is “the right decision.”

“It is an important measure to keep everyone safe,” he told a virtual news conference.

As for Conservative MPs who have not been fully vaccinated or refuse to disclose their vaccination status, Singh said that's why his party supports the continuation of the hybrid format, in which MPs can participate in parliamentary proceedings virtually from their homes or offices.

“I feel the hybrid model is a way to make sure people participate and can voice the concerns of their community without putting people at risk,” he said.

“There's really no question, as elected officials, we need to be showing leadership and getting vaccinated is an important step to fight this pandemic.”

The Liberals also support resuming hybrid sittings but the Conservatives and Bloc are opposed.

Singh said “it doesn't make a lot of sense” that Conservatives are opposed to the mandatory vaccination policy for the House of Commons precinct even as they are pushing for a full return to normal in-person sittings.

But Tory whip Richards said in a statement: “Canadians deserve a government that is accountable to its constituents and that's why under no circumstances will Conservatives support virtual Parliament.”

During his call with Trudeau, Singh said he laid out the priorities that New Democrats want to see action on as a sign that the Liberals are willing to work with other parties to make the minority Parliament work.

Among other things, the NDP wants the government to immediately extend various pandemic support benefits for individuals and businesses, provide funding to bolster the ranks of frontline health-care workers and drop its court fight against compensation for Indigenous children hurt by the child welfare system.

The NDP is the minority government's most likely dance partner to avoid being defeated but Singh warned that Liberals should not take New Democrat support for granted.

“Absolutely, we're prepared to vote against the government if they make the wrong decision, if they do something that hurts Canadians, and we will also be prepared to withhold our support,” he said, adding that he's not laying down “any firm lines in the sand.”

“Our goal is to make Parliament work for people ... Our support will be there if it's to help people.”

Trudeau's office said he would work with parliamentarians across parties to ensure that Canadians and businesses received the support they need, in an apparent reference to emergency COVID-19 benefits.

His office also released a brief readout of his conversation with May, saying Trudeau stressed his priorities include tackling climate change, reducing emissions and protecting Canada's Arctic.

Next week, the parties will begin formal talks on the shape of the new Parliament, and whether MPs will attend in person, or continue with a hybrid format, with some participating virtually.

NDP House leader Peter Julian said the Conservative concern about ministers not being present in sufficient numbers in the last Parliament was “valid.” But he said this could be resolved in talks, with reassurances from the government that ministers would be present to be questioned.

He warned that having all 338 MPs “crowded into a small room” risked turning MPs into “vectors” spreading COVID-19 around the country.

“Having 338 MPs in the House of Commons with the fourth wave, with cases rising in some parts of the country... you can imagine somebody from one of the areas where cases are increasing coming to Ottawa and transmitting COVID and then other MPs catching it and taking it back to their end of the country where there is a lower transmission rate,” he said.

Anyone with a medically valid reason for not getting vaccinated will have the option to show proof of a recent negative COVID-19 rapid antigen test result.

- With files from Joan Bryden

Conservative MP Blake Richards rises during Question Period in the House of Commons Thursday May 27, 2021 in Ottawa. THE CANADIAN PRESS/Adrian Wyld

Prime Minister Justin Trudeau speaks to media as he visits a vaccine clinic in Ottawa on Tuesday, Sept. 28, 2021. THE CANADIAN PRESS/Sean Kilpatrick