Hydro One board and CEO out

Hydro One’s CEO and board are out after a mass resignation from the utility.

“I’m happy to say today the CEO and the board of Hydro One – they’re gone, they’re done,” Premier Doug Ford said at a news conference at Queen’s Park late Wednesday afternoon.

The utility said in a statement that CEO Mayo Schmidt’s retirement from his post is effective as of today and that the utility has entered into an agreement with the province for “the orderly replacement of the board of directors of Hydro One.”

The plan for their departure comes less than two weeks after Doug Ford was formally sworn in as premier at Queen’s Park.

During his election campaign, Ford repeatedly vowed that if he became premier, he would “fire” Hydro One’s board and CEO Mayo Schmidt, whom he dubbed the “$6 million man” in a dig at his $6.2 million salary.

Ford said he would fire the board because they enjoyed generous salaries while presiding over the partially-privatized utility at a time when hydro rates around the province saw a sharp increase.

Speaking Wednesday, Ford called it a “great day” in Ontario and added that “we’re going to turn a page on hydro rates.”

He recalled people coming to him “in tears” because they had to choose between paying their hydro bill or buying food.

Pressed on how the replacement of the CEO and board would lower rates for people, Ford said a change in “mindset” at the organization would lead to lower rates.

He blamed rising hydro rates on the previous government’s Clean Energy Act and vowed that its repeal and other moves by his government would lower hydro prices by 12 per cent.

Critics have said that getting rid of the board and CEO would make little difference to hydro rates in the province. The company has noted that just two cents on a monthly hydro bill goes toward CEO pay.

However news about large executive compensation has been a flashpoint for ordinary citizens who have seen rates steadily increase.

Documents released in May showed the part-time board voted to boost their 2018 salaries from $160,000 per year to $185,000 per year, receiving half the compensation in cash and half in shares. Board Chair David Denison’s salary was boosted from $260,000 to $330,000. The company said the move brought salaries closer to the median of its broad peer group.

The previous Liberal government moved to privatize Hydro One in 2015 in order to raise cash to pay for infrastructure, eventually selling off 53 per cent of its shares in the utility by the end of 2017.

It had been estimated that the cost of getting rid of Schmidt could be as high as $10 million because of severance stipulations in his contract.

Ford insisted Wednesday that Schmidt would receive no severance following his departure.

However Hydro One said that Schmidt would receive a $400,000 lump sum payment “in lieu of all post-retirement benefits and allowances.”

NDP Energy Critic Peter Tabuns called the move to replace the board as a “backroom deal” and called on Ford to release more details about the agreement.

He expressed concern that the province would appoint its own “insiders” at the utility and questioned how Ford was able to get the board to leave without a fight.

He added that his party would like to see Hydro One completely back under provincial ownership.

“If you want to deal with hydro bills, you have to bring Hydro One back into public hands,” Tabuns said.

Paul Dobson, Hydro One's chief financial officer, has been appointed as acting CEO until a new board is in place to choose a permanent CEO.

In a statement, Hydro One Chair David Denison thanked Schmidt for his work as CEO.

"I would like to express thanks on behalf of the entire board of directors and the employees of Hydro One to Mayo Schmidt for his many contributions to the Company,” Denison  said. “He has exhibited strong and effective leadership throughout his tenure as CEO in guiding the transformation of Hydro One to a publicly traded company.”

The new board is expected to be in place by August 15. 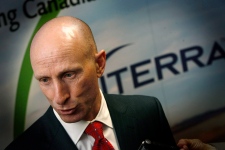 New Hydro One President and CEO Mayo Schmidt is shown in this file photo. THE CANADIAN PRESS/John Woods