'I can't give you a direct answer': Ontario premier comments on status of upcoming school break 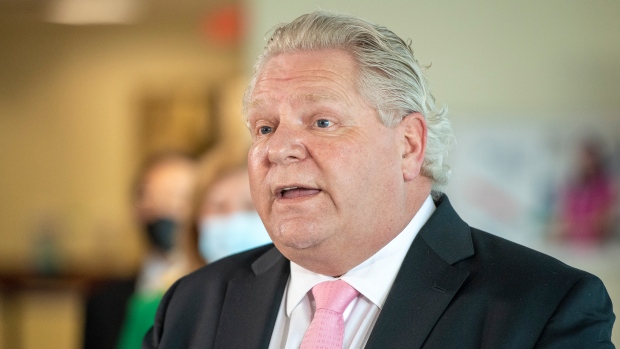 Ontario’s rising COVID-19 case numbers have brought the status of a postponed March Break into question and even the premier can’t say yet if the scheduled time off will go ahead as planned.

“I can’t give you a direct answer right now,” Ford said while unveiling the details of a new grant for struggling businesses in the tourism sector at Niagara Falls Monday.

“The [education] minister will be keeping a sharp eye on it, as well as myself, and the chief medical officer. To be very frank, I don’t want to predict two weeks out, but we’ll be out here every single day, communicating with the people.”

COVID-19 infections in Ontario have remained above the 2,000 mark for the better part of a week. On Saturday, the province recorded 2,453 infections, which is the highest number since Jan. 22.

The seven-day average for number of cases reported across the province is currently 2,094. On Feb. 11, when the Ontario government first announced it would be postponing the March 15-19 break, the average was 1,264.

At that time, the province said it was pushing the break back by a month “to limit community transmission.”

Despite that, Education Minister Stephen Lecce said Monday that the advice from Ontario’s Chief Medical Officer of Health Dr. David Williams on the April break has not changed and is still slated to start on April 12.

“If that advice changes, I’ll communicate that publicly,” Lecce said.

Lecce has long stated, based on Williams’ advice, that schools are a safe space for children amid the COVID-19 pandemic.

He said that later this week, the ministry will provide guidance so that students and staff members can observe the break safely while also preventing any possible community transmission of the disease.

Meanwhile, the Toronto District School Board sent a letter to principals and vice principals saying that staff should prepare for the possibility of moving to remote learning as the April break nears.

“As we prepare to be home for the long weekend and upcoming April Break, we again need to consider and be ready for the possibility of individual classes, schools or the system moving to remote learning for a period of time,” the letter, which was obtained by CTV News Toronto, said.

“We have received no indication that schools will close, however, we do want to make sure we are prepared to implement any decision smoothly and efficiently to be able to continue to support our students.”

Dr. Williams did not confirm whether the government was looking into the possibility of further postponing the break.

“We are trying to see if we can bend the curve at all,” Williams said, adding that the April break is still two to three weeks away. “As we’ve noted today things can change pretty quickly on the upswing.”

“We’re going to be really looking at it closely to make some assessments in our committee that looks after this.”

Williams added that schools “have not shown widespread outbreaks.”

Following the winter holiday, schools in some of Ontario’s biggest COVID-19 hot spots were shuttered for more than a month in an effort to curb community spread of the disease before resuming in-person learning.