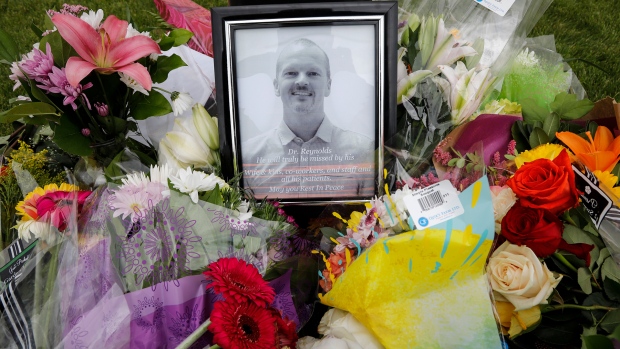 An impromptu memorial for Dr. Walter Reynolds, who died after he was attacked in an examination room rests outside the Village Mall walk-in clinic in Red Deer, Alta., Tuesday, Aug. 11, 2020.THE CANADIAN PRESS/Jeff McIntosh

RED DEER, Alta. - A man accused of killing a family doctor at a walk-in clinic in central Alberta appeared confused at his first court appearance Wednesday, telling a judge that he doesn't remember and is sick.

Deng Mabiour of Red Deer, Alta., is charged with first-degree murder in Monday's death of 45-year-old Dr. Walter Reynolds, as well as other offences.

The 54-year-old appeared via a video link, but wasn't able to tell the judge if he understood the charges laid against him.

“Listen to me. I don't remember anything because I'm sick. I want a doctor,” Mabiour, with a heavy accent, told provincial court Judge Bert Skinner.

“I'm telling you I didn't remember anything because I am sick.”

Skinner ordered the duty counsel to speak with Mabiour by phone. The charges were then read a second time.

“Did you understand the charges?” asked the judge.

“No, I didn't understand,” Mabiour replied. “Because I am sick. I lost memory. Listen to me, I don't remember. I want a doctor.”

Mabiour continued talking as the judge and lawyers spoke.

Skinner said a first-degree murder charge that goes to trial is automatically put before a jury.

RCMP have said the attack was not random and the two men knew each other through the clinic. They have not said if Mabiour was a patient, citing confidentiality.

Officers received a 911 call reporting an assault in progress at the Village Mall Walk-in Clinic just after 11 a.m. Monday. Mounties arrived within minutes.

One witness told media that she heard cries for help and a man in the clinic had a hammer and a machete.

Mabiour was arrested at the scene. Reynolds was rushed to hospital, where he died.

A vigil for Reynolds has been planned for Friday night at city hall.

The province's chief medical officer of health, Dr. Deena Hinshaw, said during a COVID-19 briefing that people need to feel connected during their grief. She urged people to connect in safe ways.

“We are all shaken by this tragic event. I imagine that, though this was an isolated incident, it leaves a mark on all health-care professionals, as we wonder about the safety of our own workplaces and the personalized patient care that is the bedrock of our profession,” she said.

Dr. Christine Molnar, head of the Alberta Medical Association, said it has been a dark week and support is available for doctors if they need it.

“A couple of days has not been enough time to feel that I can properly express my sorrow,” she said in a statement.

“Our colleague, Dr. Walter Reynolds, was a family physician devoted to his family, his patients and his calling. He will be sorely missed.”

This report by The Canadian Press was first published on Aug. 12, 2020

A bloodied hammer lies on the sidewalk after a physician died after he was attacked in an examination room at the Village Mall walk-in clinic in Red Deer, Alta., Monday, Aug. 10, 2020.THE CANADIAN PRESS/Jeff McIntosh