‘I thought I was gonna die’: Toronto nurse grateful to be alive after her tiny vehicle was plowed by a truck on the Gardiner

A Toronto nurse who was involved in a terrifying collision on the Gardiner Expressway Tuesday says she's happy to be alive.

“I honestly just feel like I've been hit by a truck which ironically I have been,” Courtenay Erhardt told CTV News Toronto in an interview. “But all in all I'm just extremely grateful and thankful that you know I'm safe. I have minor injuries but I was able to walk away from the incident which is just a miracle for me.”

The 26-year-old was on her way to her job, where she helps vaccinate immigrants and those experiencing homelessness when the collision occurred Tuesday morning around 10 a.m.

She said she was merging onto the westbound Gardiner Expressway at the ramp near Lake Shore Boulevard and Jarvis Street when a truck didn't see her and bumped her vehicle’s rear end.

“Unfortunately I went sideways and the truck just continued to go up the ramp, which felt like forever,” Erhardt said.

Footage of the terrifying collision captured from a condo balcony showed the large dump truck plowing the young woman’s Mini Cooper sideways along the Gardiner Expressway, the driver apparently not realizing that he was pushing a small vehicle sideways in front of him.

“I just remember holding my horn, and my steering wheel, just screaming, just like bawling and screaming and I honestly just thought I was gonna die,” Erhardt said. “I just didn't know if my mini was gonna flip, or if I was gonna veer out into oncoming traffic on the Gardiner.

Distraught, the young woman said she started to pray that the truck driver would realize what was happening.

Thankfully, she made eye contact with a couple who pulled up alongside her vehicle.

“They pulled out in front and saw me and just saw me bawling and then called 911 right away, and then pulled up to stop the truck,” she said. “Once the truck stopped, I was frozen, I couldn't get out of the car and they got me out and brought me to safety on the side of the road.” 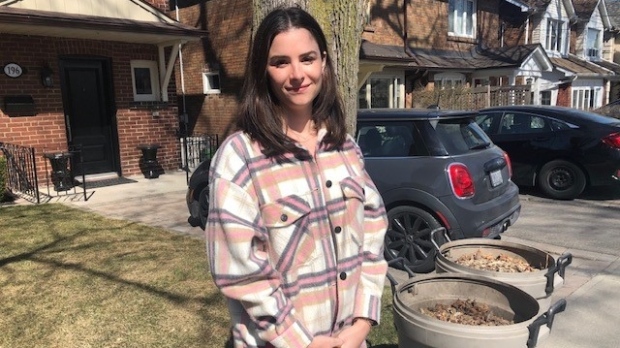 First responders told Erhardt that her vehicle had been pushed around 700 metres —  more than half a kilometre. She was checked over by paramedics and was a little sore, but thankfully did not have to go to hospital.

Despite being shaken by the frightening incident, she still managed to text her boss to say that she'd be late for work because she had been in an “accident.”

“I sent (my boss) the video this morning and she was just like, ‘oh my goodness, that's not just a bad accident!’”

The driver of the truck was also shaken once he stopped and realized what had happened. Toronto police said he has since been charged with several driving and commercial motor vehicle offences.

The driver of this Mini was lucky to escape with minor injuries after being pushed for over half a kilometre up an on-ramp and onto the Gardiner Expressway yesterday. The dump truck driver was charged.#beaware#drivesafe pic.twitter.com/ZNuZSUgiTB