'I will not be spoken to that way': Ontario long-term care minister fires back at critics amid calls for her resignation 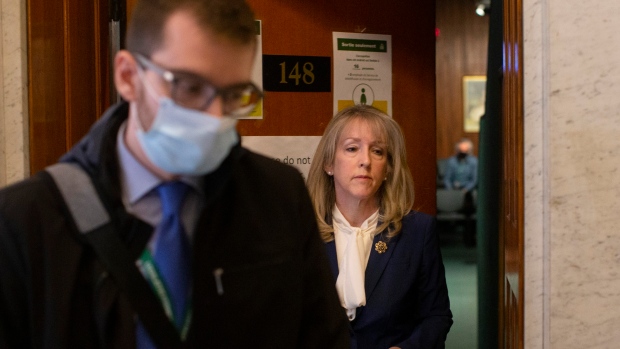 Merrilee Fullerton, Ontario's minister of long-term care, arrives at a media availability at the Queen's Park in Toronto on Monday May 3, 2021. THE CANADIAN PRESS/Chris Young

Ontario’s long-term care minister rejected calls for her resignation Tuesday while blaming the leader of the opposition for the impact the COVID-19 pandemic has had on the province’s 626 nursing homes.

“Look at your failure. I was left to pick up the pieces from a devastating 15 years of neglect,” Minister Merrilee Fullerton said during question period at Queen’s Park.

“I will not be spoken to that way by the leader of the opposition that neglected this sector.”

Fullerton’s comments were directed at NDP Leader Andrea Horwath, who first openly called for her resignation from cabinet yesterday.

Horwath only assumed the role of leader of the opposition in 2018, but Fullerton suggested that the “neglect” in long-term care homes could have been avoided if she had been a stronger “voice” for the sector during the previous Liberal government.

The tense exchange follows a scathing report released last week into the ministry of long-term care’s handling of the COVID-19 pandemic in assisted living facilities across Ontario.

According to the report by Ontario’s COVID-19 Long Term Care Commission, the ministry had “no plan” to protect residents from the spread of the novel coronavirus that left 3,928 residents dead.

The 322-page report released Friday found that the sector was insufficiently prepared for a pandemic, and it was made worse by the province's slow and reactive response when the virus arrived.

Moreover, the commission found that at least 26 residents at one facility died due to “dehydration prior to the arrival of the Canadian Armed Forces due to lack of staff to care for them.”

“They died when all they needed was 'water and a wipe down,'” the report notes.

Asked when she was aware of these deaths by Horwath, Fullerton did not answer and suggested that such a question was “bordering on obscene.”

Deputy Premier and Minister of Health Christine Elliott was faced with the same question by reporters to which she responded, “you’d have to ask the minister of long-term care.”

Fullerton did not make herself available to reporters for questions on Tuesday. A day earlier, and while reacting to the report publicly for the first time, the minister held a brief news conference which ended as many members of the press gallery were still waiting to ask questions.