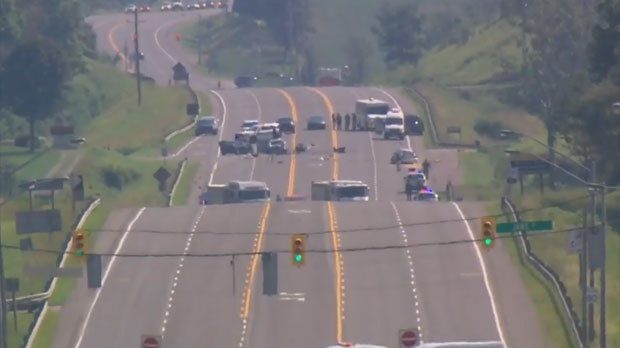 York Regional Police investigate at the scene of a crash in King Township on Aug. 4, 2018.

A 23-year-old man has been charged with impaired driving causing death in connection with a four-vehicle crash in King Township that claimed the life of a five-year-old girl.

On Aug. 4 at around 7:15 a.m. York Regional Police were called to a multi-vehicle collision near Davis Drive and Keele Street.

Police say a silver Volvo first collided with a Ford Taurus and the impact of the initial collision caused the Taurus to hit a Cheverolet Cobalt. The Cobalt then collided head-on with a Honda Civic.

In total, nine people were involved in the crash.

Five-year-old Lux Peyton Gomez, who was one of the occupants of the Civic, sustained the most severe injuries and later died in hospital.

Speaking to CTV News Toronto on Tuesday, the girl’s aunt described her as an angel.

Cameron said the loss of the kindergarten student has been devastating for the family.

Gomez’s parents, 32-year-old Mark and 30-year-old Abby, were also injured in the crash and required surgery.

Cameron recalled how difficult it was to tell the couple their daughter was dead.

“They broke it to Abby first because they thought Abby could take it more than Mark because Mark was badly injured,” she said.

Gomez’s two brothers, ages 11 and three, were injured in the crash as well.

The 23-year-old driver of the Volvo and his 20-year-old passenger were also hospitalized following the crash.

In a news release issued Tuesday, police said charges have now been laid in the case.

He has been released on bail and is scheduled to make his next court appearance in Newmarket on Jan. 24.

Anyone with information about the deadly crash is asked to contact York Regional Police.

Five-year-old Lux Peyton Gomez, who was killed in a collision, is seen in an photograph provided by family.