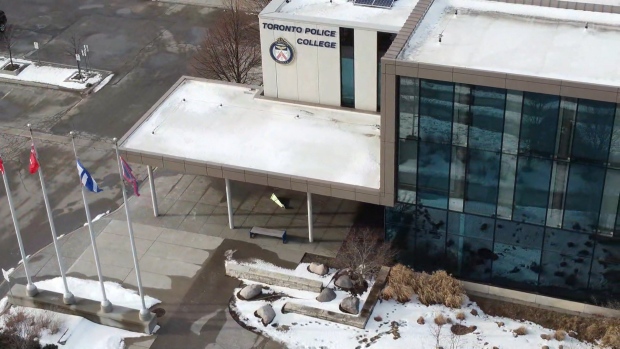 There are currently two active COVID-19 outbreaks at Toronto Police facilities, one of which involves at least 32 positive cases.

In a statement provided to CP24 on Tuesday afternoon, Toronto police confirmed that there have been separate outbreaks reported at 31 Division headquarters in North York and the Toronto Police College in Etobicoke over the past two weeks.

They say that resources from other areas of the city have been assigned to assist with calls for service in 31 Division as a result of the outbreak but there has been “no impact” on service levels within the community.

Meanwhile, they say that all in-person training at the Toronto Police College has been out on hold “out of an abundance of caution” with virtual training being offered where possible.

“The health and safety of our members is our top priority. We are moving as quickly as we can to support our members and put measures in place to prevent further spread of this highly contagious virus,” the statement says.

Police refused to reveal how many cases are associated with the outbreaks but in a statement provided to CP24 Toronto Public Health said that it has been made aware of at least 32 cases at the Toronto Police College.

In their statement, police said that both locations “have undergone multiple cleanings and thorough disinfections.”

They also say that “extensive contact tracing is being prioritized” to ensure members who may have come into a positive case get tested.

“This is a rapidly-evolving situation at both locations,” Toronto police spokesperson Meaghan Gray told CP24.

Toronto Public Health says that it is conducting a “outbreak investigation” at the Toronto Police College which will include a “discussion regarding what infection control and public health measures are in place.”

Speaking with CP24 on The Mayor Tuesday evening, Mayor John Tory said in general, he would like to see stronger infection-prevention measures for workplaces, especially when the city reopens.

“The police college is another one where I don't know exactly the circumstances in which all those cases arose, but if you think about the training they're going through -- and I've been to see it before -- the people are often close to each other, and so on,” Tory said. “You've got to, I think, make sure that we work on all of that kind of thing so that when we reopen on a gradual basis, we don't go back and lock down again. Because to me, that would be the worst disaster of all is to go backwards once we've gone forwards hopefully for the last time.”

Tory also said he thinks police officers should be in line for COVID-19 vaccines along with medical first responders because there are many instances where they show up first to medical calls and are required to administer CPR and to interact with people in close circumstances.