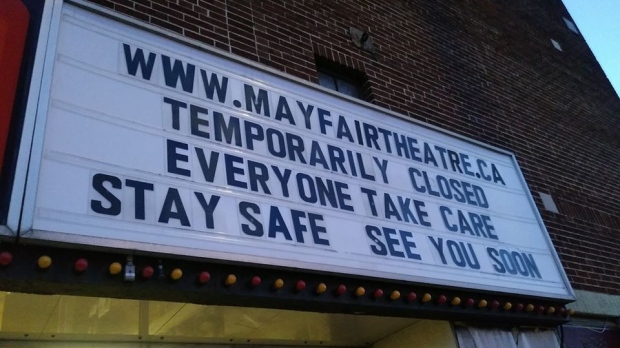 TORONTO - Independent cinemas in Toronto and Ottawa are coming up with different ways to generate cash as COVID-19 restrictions force them to shut their doors for a second time since the pandemic began.

From offering patrons the chance to have their names grace cinema walls for a price, to selling concession stand staples at the front door, the theatres say they're doing what they can to stay afloat.

“Anything we can do, we will do because we can't be open for screenings or rentals,” said Josh Stafford, the owner of the Mayfair Theatre in Ottawa.

Ontario announced tighter rules for Toronto, Peel Region and Ottawa on Friday in a bid to tackle a surge in COVID-19 cases. The measure included having cinemas close for 28 days.

At the Mayfair, customers can pay to have their names on a theatre wall, as well as on couches, above emergency exits and even bathroom stalls.

The Ottawa theatre began allowing customers to buy naming rights to seats during the first shutdown of cinemas ordered by the province in the spring and sold out spots for all its 325 seats. The Mayfair is now offering patrons the chance to have their names on plaques on a wall.

“Those are starting to sell a lot which is just very nice. So that's one thing we're doing to get in a few dollars,” Stafford said.

The Mayfair also offered a video-on-demand service through links provided from independent distributors during its first shutdown and is considering it again, Stafford said.

“The bizarre thing is, we're a movie theatre, we never expected to be a streaming service or a video store kind of thing but a number of our patrons made use of it,” he said.

Like the Mayfair, the Fox Theatre in Toronto also offered naming rights for seats during the first shutdown and sold out all available spots. It's now offering popcorn and candy, as well as beer and wine from a front-door concession stand to bring in cash during the current shutdown.

Owner and programmer Andy Willick said the food sales only cover a small percentage of the theatre's typical revenue but every little bit helps.

“Our community has been really supportive during our closure,” he said.

The Paradise Theatre, another independent cinema in Toronto, has created what it calls a “Bottle Shop” where customers can shop for wine, spirits and cheeses out of the lobby or by delivery.

“With us not able to operate Paradise Theatre as it was intended, we had no choice but to pivot,” general manager Keegan Ferguson said in an email.

The theatre also offers patio dining at its restaurant, which Ferguson said has been the company's “lifeblood” during the pandemic.

Stafford, at the Mayfair in Ottawa, said he hopes the COVID restrictions only last a month.

“We're just kind of standing by and hoping for the best,” he said.