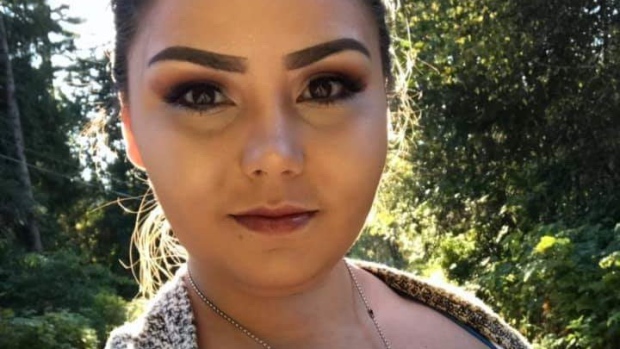 Chantel Moore is shown in this undated photo posted on a GoFundMe memorial page, Support for family of Chantel Moore. A 26-year-old Indigenous woman from British Columbia has been shot and killed by police in northwestern New Brunswick. First Nations groups identified the woman as Chantel Moore. THE CANADIAN PRESS/HO, GoFundMe *MANDATORY CREDIT*

VANCOUVER -- One of Chantel Moore's grandmothers says her granddaughter's shooting death in New Brunswick isn't the first time she has lost a family member to police violence.

Nora Martin joins other Indigenous families in calling for a significant shift to the way authorities interact with racialized communities amidst a broad history of brutality.

"We really need to work together to change this whole system," she said in an interview from Tofino, B.C. "We've been dealing with racism all our lives."

Martin said her family has endured generations of racism and trauma at the hands of authorities and is calling for lasting change to end the pattern.

Moore, 26, died Thursday when police arrived at her home in response to a request to check on her well-being. Edmundston police say their officer encountered a woman with a knife making threats. She was shot and died at the scene.

The story makes no sense to Martin, who said Moore didn't have a mean bone in her body and was too petite to have posed any real danger to an armed officer.

Martin is the sister of Moore's biological grandmother but says she is considered a grandmother in their Tla-o-qui-aht culture.

"What struck me right away when I heard that was that it has a lot to do with what's happening in the United States with the black people getting killed," Martin said.

"We've had that happen here in our own country for years now and that was my first thought, that this is racially motivated."

More than 50 years ago, Martin's grandfather suffered a broken neck while in police custody, she said.

Another relative died 10 to 12 years ago in police custody, too. There was an investigation and recommendations made, she said, but nothing changed.

The violence isn't limited to police action. Martin said she and her relatives went to residential school, day school and foster care.

"We all went through the system where we were horribly abused physically, emotionally and sexually," she said.

She's also been called a "dumb, lazy Indian," she said, even though she has held a job since age 14 and pays her taxes every year.

Rather than revenge, Martin said she wants justice and peace.

"I don't go around hating people, I've never attacked a white person because of how they treated me," she said.

Martin said Moore had a huge family that loved her.

Moore was set to begin classes at a community college when she was killed, Martin said.

Grand Chief Stewart Phillip of the Union of B.C. Indian Chiefs warned against assuming a family is criminal just because it has been victimized by police multiple times. To assume so would be "very racist" and lies at the heart of police brutality against people of colour and the poor, he said.

"Poverty is not a crime, colour is not a crime. Yet the racist attitudes that permeate and are deeply entrenched in the attitudes and values of Canadian society suggest that all people of colour or people who are poor are criminal and should automatically expect to be harassed by police," Phillip said.

Phillip says what happened to Moore is "absolutely outrageous and horrific."

Officers who pull the trigger should be immediately pulled off the force, but they rarely face adequate consequences, he said.

"I've been in enough court rooms in my life to know that the legal defence is 'I feared for my life,' and they get away with it. In some cases, they get suspended for a day or two or a week.

"There needs to be severe consequences for the use of deadly force to the point where it will never happen."

Martin's experience was echoed by the family of an Indigenous man who died three years ago in police custody in Prince George, B.C.

Dale Culver of the Gitxsan and Wet'suwet'en Nations was 35 when he died in July 2017.

A police release at the time says officers responded to a report of a man casing cars and they chased a man on a bicycle who fled from the scene. A struggle ensued, more officers were called, and pepper spray was used. Medical support was called when officers noticed Culver was having trouble breathing, he died soon after.

The BC Prosecution Service is considering charges against five officers involved in the incident, after receiving a report last week from police watchdog the Independent Investigations Office, or the IIO.

The RCMP say in a statement they will continue to support the officers, who remain on duty, and its thoughts are with the family.

In April, the IIO announced a new investigation into the death in custody of Everett Patrick, whom the family has identified as Culver's cousin.

The office says in a release that RCMP reported that on April 12, officers responded to an alarm at a sports store. After hours of negotiating, Patrick was apprehended, medically cleared at the hospital and taken to the Prince George detachment cells. Hours later, he went into medical distress and was taken back to hospital, where he was found to be suffering serious injury. On April 20, the watchdog was notified that Patrick died in hospital.

"There's not a lot of faith in the RCMP in Prince George right now, at least from us and our family," said Tracy Speed, the mother of Culver's daughter Lily Speed-Namox.

"There's been some kind of trust between the people and the RCMP that has been broken and we need to be able to find a way to mend that trust so that there is no issue between any kind of race and the RCMP."