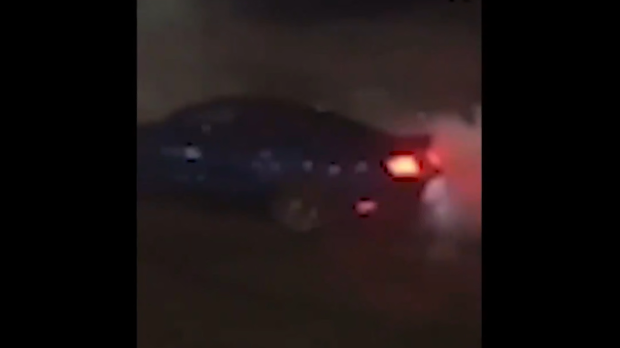 Ontario Provincial Police have released a video of a Ford Mustang doing donuts in an unspecified parking night before slamming into a parked vehicle. (@OPP_HSD/ Twitter)

Police say that a group of individuals who wrecked their vehicles in a “drifting exhibition” in a Greater Toronto Area parking lot on Friday night are facing charges after they staged a collision on Highway 404 in order to cover up the real source of the damage.

Numerous onlookers can be seen in the video.

Police say that in the wake of the collision the two vehicles were relocated “with the cooperation of tow trucks” and the owners of the two vehicles then reported a “fraudulent collision” on Highway 404, presumably so that insurance companies wouldn’t know the actual circumstances that caused the damage.

Police say that four individuals have since been arrested, including the two tow truck drivers who participated in the alleged fraud.

The driver of the Mustang has been identified as Noah Ferrusi, 19, of Oakville. He is charged with obstructing a peace officer and public mischief.

The three other accused individuals - Jason Montes, 23, of Etobicoke, Stephen Marki, 28, of Richmond Hill, and Mohammadreza Teherina, 23, of North York – are also charged with obstructing a peace officer and mischief.

#StreetRacers and #StuntDrivers in #GTA hijacked parking lots and roads Friday night.
After allegedly failing in a drifting exhibition in a parking lot, two cars were relocated with the cooperation of tow trucks and the driver and owner reported a fraudulent collision on Hwy 404 pic.twitter.com/USjPONgKUm