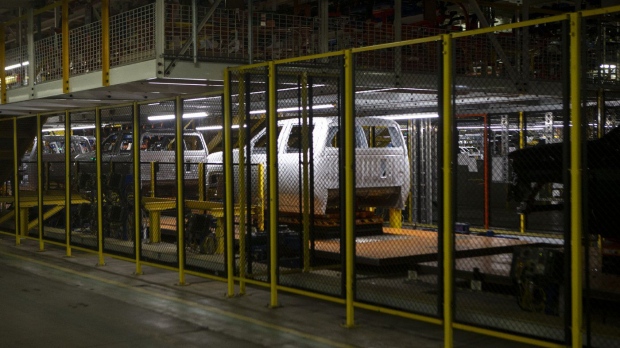 The cab of a Chevrolet Silverado sits on the assembly line at the GM plant in Oshawa, Ont., Tuesday, Feb. 22, 2022. THE CANADIAN PRESS/Chris Young

OTTAWA - The federal Liberals are being asked to muscle space in next week's budget to help Canada become more productive, and lay investments to lure new companies as part of a push to simplify pandemic-strained supply chains.

For years, Canadian businesses have under-invested in technology and other measures that could help workers more easily reach the same output they do now.

Coming out of the COVID-19 pandemic, an association of manufacturers and exporters worries the country will fall further behind competitors in peer nations without the right push now.

Thrown into the mix are supply chains that have been gummed up from the reopening of the global economy that has led a drive domestically and in the United States to expand continental manufacturing capacity.

Dennis Darby, president of Canadian Manufacturers and Exporters, said the confluence of circumstances is why his group and others are looking for investments and incentives to spur post-pandemic change and deal with current strains.

He said the country needs to attract the needed capital now and get companies to invest in Canada before they start looking elsewhere, including the United States, to plant their money.

It's why his sector is looking for tax incentives for companies to purchase new machinery, equipment and technology, and expansion of an existing federal fund that would see it provide $2.5 billion annually to support large-scale capital projects.

Darby pointed to the Liberals' recent promise of more social programs - and therefore more spending - as part of a political pact with the New Democrats.

“There is always a lot of pressure on budgets, especially this one,” he said. “But we have to make those investments, putting a real stake in the ground and saying, yeah, we're going to attract the capital that we need to compete.”

The risk to Canada from problems with global supply chains has been on the minds of federal officials since the fall of 2020 when they began to identify pressure points that could cause economic pain domestically if left unchecked.

Officials identified 10 supply chains vulnerable to import problems and the availability of critical goods, although they have all been blacked out in documents obtained by The Canadian Press under the Access to Information Act.

Officials framed the work on supply chains as part of positioning the country “in the economy of the future, ensuring economic prosperity and COVID-19 recovery efforts.”

On Friday, Darby and members of his association met virtually with International Trade Minister Mary Ng. In a tweet, Ng wrote that the group spoke about “creating opportunities for exporters through trade and ensuring the resilience of our supply chains.”

Pandemic-induced delays of deliveries mean companies have been challenged to keep up with consumer demand, which has contributed to three decade-high inflation rates.

The reliance on long supply chains has made the country vulnerable to hiccups in deliveries of goods, Darby said.

He said the budget plan should also provide the sector with help to deal with a labour shortage that amounts to about 80,000 unfilled positions. Darby said companies could fill those spots quickly given demand, but just can't find available workers - a common refrain in large swaths of the Canadian economy.

She said the trick is to make sure the economy can absorb that growth without fuelling more demand and further straining supply chains.

“We just have to make sure that our growth is offsetting the difficulties that are coming from high inflation and supply chain disruption.”

This report by The Canadian Press was first published April 1, 2022.