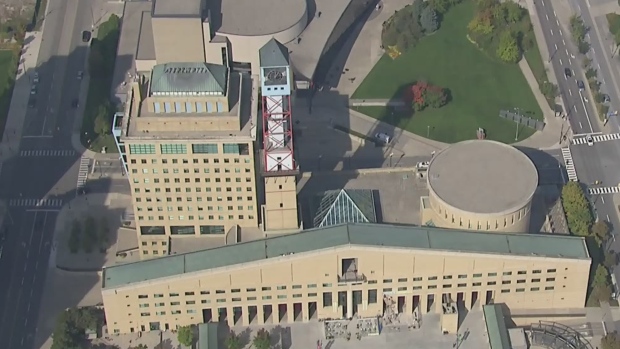 Mississauga City Hall is pictured in this aerial image.

"In consideration of the councillor's actions, I find that he engaged in harassment against Councillor Ras. Damaging someone's property, especially their vehicle, is behaviour which is demeaning, offensive, and unwanted. The Respectful Workplace Policy makes clear that a single incident of hostile or offensive behaviour which is significant can constitute workplace harassment. Intent or motivation is irrelevant. What matters is how the conduct would be perceived," Swayze wrote in his report.

"I have decided to recommend a relatively higher suspension of compensation paid to him as a member of Council because his action was mindless vandalism and devoid of common decency."

In February, city council asked Swayze to investigate the incident that happened in a secure parking garage at city hall.

Ras, who resigned in January, said the April 2021 incident was not the first time Starr allegedly scratched her car, claiming that he had "repeatedly vandalized" her vehicle. In her online post announcing her resignation, Ras hinted about "workplace issues" and said councillors do not have the proper avenues to address them appropriately.

Swayze submitted his findings to council on June 29.

In his report, Swayze, citing evidence and materials he gathered during the investigation, said Ras' car was first scratched in the spring of 2019.

He stated that the car's front bumper was discovered with scratches on several occasions while it was parked in the city hall garage. Ras called Peel police, but due to the lack of security cameras, "I understand that the police investigation was unsuccessful," Swayze said.

Fast forward to April 13, 2021, when Ras found more scratches on her car. She called security and asked that they pull up surveillance videos that had been installed in the parking garage. Ras also notified police, who reviewed the footage and identified Starr as a potential suspect.

Swayze also reviewed the footage, which he said showed Starr exiting his truck and walking in front of Ras' car.

"He is seen clearly through the side and front window of her car crouching down and turning to face the grill of her car within touching distance from the car. He then stood up and walked to the garage exit," Swayze wrote in the report, describing what he saw in the video.

In a statement he submitted to Swayze through his lawyer, Starr admitted that it was him in the video but denied that he keyed the vehicle, saying that he stopped in front of Ras' car to pick up a piece of paper he spotted.

However, Swayze rejected Starr's claim, saying he does not accept it as a "credible explanation."

"I have reviewed the security footage in great detail. The councillor provides no information on what the "piece of paper" was, its size, or how it could have gotten there. Before Councillor Ras parked her car, there is no visible material or object on the ground in the area that would be underneath the front driver's side bumper. Even when the headlights from Councillor Ras's car shine directly where that "piece of paper" is alleged to be, there is nothing visible," Swayze said.

Swayze noted that the detective who investigated the April incident told him that a solicitor acting on behalf of Starr "admitted his client's guilt" and made arrangements to pay for the repair of the damages "to avoid a criminal charge of nuisance under $5,000."

Swayze said he reviewed an invoice from a collision repair shop indicating fixes done on Ras' car. Starr, however, maintained that he agreed to pay based on the advice from his solicitor.

The commissioner stated that he also reviewed statements from a property damage appraiser, who was retained by Starr, a biomedical engineer and a chiropractor.

"Based on my review of all the evidence in my investigation, including the materials which were provided to me at the very last moment, and on a balance of probabilities, I find that it is more likely than not from all the circumstances that the Councillor caused the damage to Councillor Ras's car on April 13, 2022," Swayze said.

For his part, Starr, through his counsel, accused Swayze of being biased because the commissioner did not initially investigate the incident when Ras came to him.

In his defence, Swayze said Ras consulted him about the scratching incidents and sought advice but did not file a formal complaint.

Starr also said that the investigation was politically motivated, stating that Mayor Bonnie Crombie's comments to the media about the incident "indicate council's motivation in passing the resolution to request an investigation and that these motivations are improper and political."

At that time, Crombie apologized for not "pushing" Swayze to investigate reports of harassment from the councillor.

"As the leader of council I should have done everything in my power to protect my friend and colleague. I should have pushed our Integrity Commissioner to open an investigation on this once the criminal investigation was closed by police," she said.

Starr was asked by council in February to take a leave of absence until the investigation was completed and the findings reported to them. City council will consider the report in a meeting on Wednesday.

Starr, who was first elected to council in 2010, is seeking re-election in October.