Six people were killed and 33 others were injured when an Ottawa public transit bus and a Toronto-bound Via Rail train collided during Wednesday morning's commute.

People who were aboard the double-decker OC Transpo bus said passengers shouted at the driver to stop moments before the vehicle collided with the train at a level crossing on a dedicated transit road in the southwest suburb of Barrhaven.

Tanner Trepanier, a university student who was sitting in the northbound bus' upper level, said passengers could see the westbound train bearing down on them.

"People started screaming, 'Stop, stop!' because they could see the train coming down the track," Trepanier told The Canadian Press after the crash.

An unidentified woman told CTV News that the bus driver applied the brakes after people screamed, but by then it was too late.

Officials say five people died at the scene and a sixth died after being taken to hospital. The bus driver, identified as 45-year-old Dave Woodard, was among those killed when the bus and passenger train collided around 8:45 a.m. as people commuted to work or school.

Three of the six victims have been positively identified, police said.

In total, 34 people were treated at local hospitals and at least 11 of those arrived to hospital in critical condition, including the person who died in hospital, officials said at a news conference.

Authorities could not say how many of those patients remained in life-threatening condition by late Wednesday afternoon.

“This terrible tragedy struck and we lost six residents of our city. We are grateful for outpouring of condolences, both inside and outside our city,” he said.

Rebecca Guilbeault, who was on the 82-seat bus with her one-year-old son, told CTV News she was sending a text message to a friend when passengers yelled at the driver to stop.

“As I looked up, the bus was coming into contact with the (safety) gate,” Guilbeault said. “I don't know what happened … but he didn't slow down and it just impacted with the train.”

Officials could not confirm how many people were on the bus at the time of the crash but afterwards, survivors ran off the vehicle and waited for firefighters, paramedics and police to arrive at a chaotic and upsetting scene. Several people were already dead and many more were badly injured, Guilbeault said.

Witnesses said the rail crossing's safety barriers were lowered and its warning lights were flashing at the time of the horrific crash, which sheared off the front end of the downtown-bound bus at a crossing northeast of Fallowfield Station, near Woodroffe Avenue and Fallowfield Road.

The Transportation Safety Board of Canada (TSB) and police are investigating the cause and any contributing factors. The TSB is analyzing the train's data recorder, as it attempts to confirm the speeds of the train and bus, and whether the brakes were applied. The investigation may take several months to complete.

Pascal Lolgis, who witnessed the crash, said the Route 76 bus appeared to drive through a lowered crossing barrier.

"Boom! It went into the train like that," Lolgis told The Canadian Press. "He didn't stop. He must have lost his brakes. Or he had an ... attack or whatever. He just didn't stop. He just keep going like that. Then he get hit."

Another witness, Mark Cogan, said the rail barrier was down.

"The train is going through," Cogan said. "And I was just looking around, just watching things happen. And noticed that in the bus lane, the double-decker bus ... I saw him and he just kept going.

"I just thought maybe there's a side way around or something but instantly he just ... he smoked the train," Cogan said. "He went through the guard rail and just hammered the train and then it was just mayhem."

A motorist who witnessed the crash told CTV Ottawa that he stopped for the train on Woodroffe Avenue, which runs parallel to the dedicated transit line. The man said the rail crossing’s barriers were lowered when the collision occurred.

Via passenger feared train would flip

No serious injuries were reported aboard Via Rail train No. 51, which departed from Montreal and was headed to Toronto’s Union Station. The train's locomotive and one of its four passenger cars derailed after hitting the bus.

“I thought we were going to flip over,” Gencarelli, a university student, told reporters after passengers were removed from the train. “People were just shocked because it happened so suddenly.”

After the crash, train staff alerted passengers that there had been a collision.

Gencarelli said he credits the train’s conductor for keeping it upright.

“I think you have to give credit to whoever was driving the train,” he said. “It could have flipped.”

Train passengers later boarded buses to continue their journey to Toronto. Via Rail shut down rail traffic on its Ottawa-Toronto corridor and is using buses to transport customers between the cities.

Dozens of emergency workers attended the scene as part of a mass casualty response, and hospitals brought in additional staff to treat the victims.

At one point, 19 paramedic vehicles were at the scene along with more than 30 paramedics. The response time was about six minutes, according to Anthony DiMonte, with the Ottawa Paramedics Service.

"This is one of the worst events we have seen in the city or at this hospital,” said Dr. Andrew Falconer, the hospital's chief of staff.

Social workers and other staff were helping the victims and their families with the emotional trauma they suffered, Falconer said.

To co-ordinate the response, the City of Ottawa opened its emergency operations centre and set up a trauma centre at a sports complex to assist victims and their loved ones. Flags at municipal buildings have been lowered in honour of the victims.

“Train just derailed pulling into Fallowfield #ottawa #ottnews Nothing tipped as far as we can see,” tweeted @joeboughner.

Moments later, he wrote: “Train was slowing down approaching station, doesn't look like anyone's hurt. It's a few hundred feet from the station.”

A short time later, the severity of the incident became clear.

“Sounds like it was more serious than it looked from here. Thoughts with those on board bus and train,” @joeboughner tweeted.

Via crossings on TSB 'watchlist'

Passenger train crossings are on the TSB’s “watchlist” because the risk of collisions with vehicles remains too high in busy rail corridors, according to the agency’s website.

Over the past 10 years, there have been 257 accidents involving passenger trains and vehicles at level crossings in Canada, including 71 in the Quebec City-Windsor corridor, which is Canada’s busiest and most travelled train route, the TSB says.

However, at a Wednesday afternoon news conference, TSB COO Jean LaPorte, said records show there has not been an accident at the crash site since 2002.

The intersection was designed in 2004, approved by CN Rail and the city and was assessed in 2005.

“A full and independent investigation is underway to make sure it does not happen again,” Laporte told reporters. “We are documenting and photographing the site, we are assessing crossing signals and sight lines, testing warning signals and lights at crossing to make sure they are working. We will find locomotive data recorder and other recording devices. It’s a very complex investigation. We will take time required - it could take several months. “

Within hours of the crash, several politicians and agencies offered their condolences to the victims and their families.

“My heart goes out to all the individuals and families who are affected,” said Premier Kathleen Wynne at a news conference in Toronto.

Wynne thanked first responders, and said the province will assist the City of Ottawa and federal government, if help is required.

Later, MPPs held a moment of silence at Queen's Park.

The City of Toronto is also offering assistance, if needed.

Mayor Rob Ford tweeted: "My thoughts and prayers go out to the families affected by the tragic collision in Ottawa. We are ready to provide support as necessary."

Prime Minister Stephen Harper said he was saddened to learn of the crash.

"Deeply saddened to hear about the bus-train collision in Ottawa this morning," Harper tweeted. "Our thoughts & prayers are w/ the families of those involved."

A vigil is being planned for the victims of the crash Wednesday night in front of Fallowfield Station.

With files from CTV News and The Canadian Press. 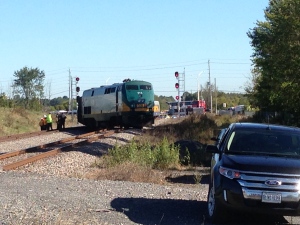 From witness accounts to the mournful reflection that followed, this is how the story unfolded on Twitter. 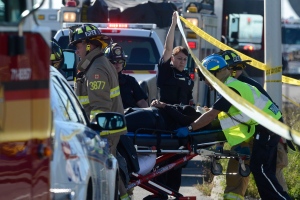 Pictures from the scene of a fatal train crash in Ottawa on Sept. 18, 2013. WARNING: Some photos may disturb viewers.

An OC Transpo bus sits where it collided with a Via Rail train during the morning commute in Ottawa on Wednesday, Sept. 18, 2013. (The Canadian Press/Adrian Wyld) 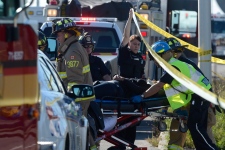 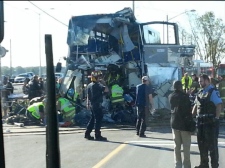 People gather after a public transit bus was hit by a Via Rail train in Ottawa on Wednesday, Sept. 18, 2013. (CTV Ottawa)