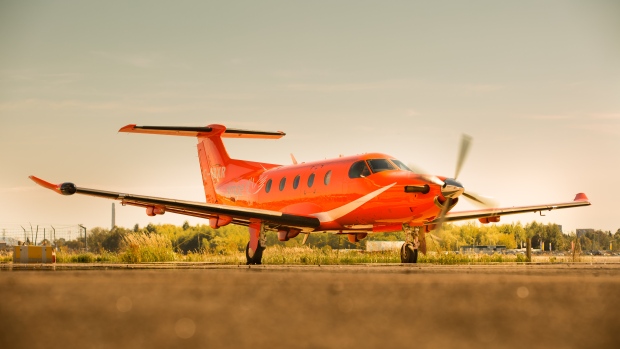 An ORNGE Pilatus PC-12 airplane is shown at the Thunder Bay airport in this undated handout photo. Authorities are looking into a series of laser strikes on air ambulances in northern Ontario. THE CANADIAN PRESS/HO, ORNGE *MANDATORY CREDIT*

Ontario's air ambulance service says there have been several recent laser strikes on its aircraft in northern Ontario, which police are now investigating.

Ornge said the incidents happened on three consecutive nights starting March 4, with lasers beamed into cockpits of the aircraft in the airspace around Sudbury, Ont., and Timmins, Ont.

“It can be potentially catastrophic if a pilot was hit by a laser as they were approaching the runway to land, if they were distracted at the wrong time,” said Chris Busch, Ornge's manager of training and standards for fixed-wing aircraft..

“The worst case scenario, really, is losing control of that aircraft.”

Ornge said that one of its planes was at cruising altitude on March 4, heading toward its base in Timmins, when red and green lasers were beamed into the cockpit.

The next night, another Ornge aircraft was departing from a Sudbury airport to the service's base in Timmins when it was struck with a green laser.

Another plane was bringing a patient into Sudbury's airport on March 6 when it was hit with red and green lasers. The crew had to alert air traffic control and avert their eyes while still maintaining control of the plane, Ornge said.

All three flights landed at their intended destinations, Ornge said, with the crew filing reports to Transport Canada each time.

“Citizens should call their local police immediately if they see someone pointing a laser at an aircraft,” said Sau Sau Liu. “The public can also report laser attacks to the Transport Canada regional office in their area.”

A spokeswoman for Sudbury police confirmed that investigations are ongoing.

Under the Aeronautics Act, anyone convicted of pointing a laser at an aircraft could face up to $100,000 in fines, five years in prison, or both.

Ornge's Busch said that take offs and landings - when planes are most vulnerable to laser strikes - are a critical part of any flight.

“The most dangerous time a plane has is when it's close to the ground. Planes like being up nice and high,” said Busch.

Laser strikes don't effect the instruments or controls of an aircraft, but Busch said that any tiny imperfection in the cockpit's windows will split the laser beam, filling the pilot's cabin with a blinding light.

“If a laser or other directed bright light hits it at night when we're supposed to be utilizing our night vision it can create quite a glare in the flight deck,” said Busch.

“That can disrupt vision, prevent you from seeing your instrumentation if they're turned down quite low - those are the real big dangers.”

This report by The Canadian Press was first published March 13, 2021.