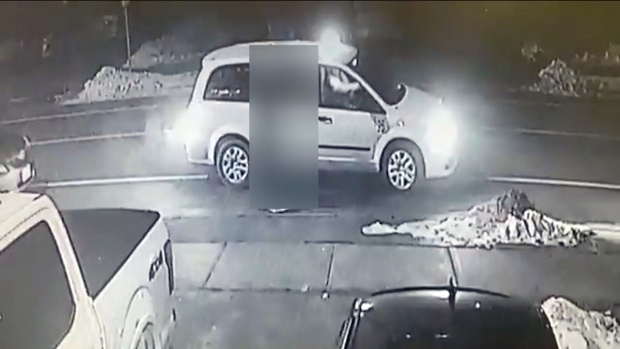 A man now identified as Balvinder Bains stands outside a van seconds before he was run down on Christmas Day, 2019 in Brampton.

Police have named the 51-year-old man crushed underneath a minivan in a vehicular homicide in Brampton on Christmas Day that occurred in full view of a surveillance camera.

Police and paramedics were called to Sunny Meadow Boulevard and Red River Drive, south of Sandalwood Parkway East, just before 11 p.m. Wednesday for a report of a man struck by a vehicle.

They arrived to find an adult male suffering from overwhelming trauma consistent with being run over by a vehicle.

He was rushed to a local hospital where he was later pronounced dead.

On Friday, officers identified him as Balvinder Bains.

In a video widely circulated on social media, the driver of a van with a bright light on the front portion of its roof is seen reversing with the passenger’s side door of the vehicle still open, while a man standing next to the vehicle appears to be speaking to the driver.

The driver then points the van in the direction of the victim and accelerates, running over his head and torso with the right front wheel, before reversing, straightening out and speeding off.

CP24 has aired only a short portion of the video due to its graphic nature.

Later on Thursday, police took a 53-year-old male into custody.

He was charged with second-degree murder.

Officers and court documents identify the suspect as Amarjit Lamba.

He appeared in court in Brampton on Friday morning and is next scheduled to appear via video link on Jan. 2.

She said her husband works as a taxi cab driver and speaks limited English.

The court has assigned him a Punjabi interpreter.