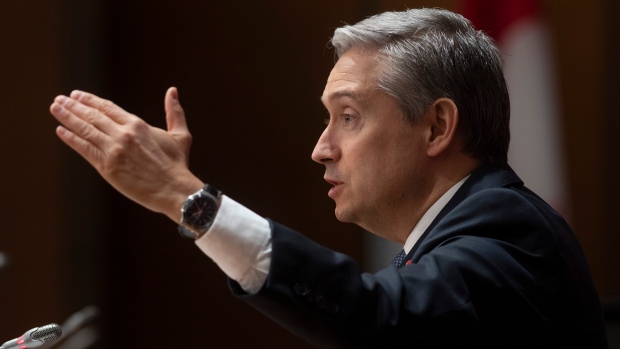 Foreign Affairs Minister Francois-Philippe Champagne gestures as he responds to a question at a news conference in Ottawa, Thursday, April 2, 2020. THE CANADIAN PRESS/Adrian Wyld

OTTAWA - Iran has the final say over who gets to analyze the flight data recorders from the Ukrainian passenger jet that its own Revolutionary Guard shot down in January, says the head of Canada's Transportation Safety Board.

Kathy Fox, the chair of the TSB, said in an interview Monday that Canada wants to change the section of international aviation law that gives Iran the authority to lead the investigation and control what information is released publicly. But she said that is a complicated process that won't happen any time soon.

Fox confirmed the long-awaited downloading of crucial flight data and cockpit voice recordings from the Jan. 8 crash was completed successfully in Paris on Monday. The safety board sent a team to Paris to witness the downloading of the data.

“It's not clear to us whether some of that work is going to be done in France or whether Iran is simply going to take the data and go back and do it in their country,” Fox said in an interview Monday.

There were 176 people who died when Ukraine International Airlines Flight 752 crashed shortly after taking off from Tehran, including 55 Canadian citizens, 30 permanent residents and dozens of others with connections to Canada.

Iran initially denied responsibility for the crash, but was forced to acknowledge the shootdown after video footage on social media appeared to show at least one missile striking the jet. The tragedy unfolded after Iran launched missiles into Iraq at two American military bases in retaliation for the U.S. having killed a top Iranian general.

Iran's delegate to the International Civil Aviation Organization told the UN agency on March 11 that the flight data and cockpit voice recorders would be sent to Ukraine's aviation investigators by March 25, but later blamed the COVID-19 pandemic for a delay.

Fox also made clear that she was able to say what she did publicly because Iran gave the necessary permission required under international aviation law to do so.

Under Annex 13 of the Convention on International Civil Aviation, the “State of Occurrence” - in this case, Iran - becomes the lead investigator for the crash because it happened in Iran.

But Iran could ask for help from another country or designate another country to lead the investigation, as was the case when Ukraine turned to the Netherlands to lead the probe into the shootdown of Malaysia Airlines Flight 17 by pro-Moscow Ukrainian rebels over eastern Ukraine six years ago.

“ICAO permits countries to delegate. For whatever reason, Iran has chosen to lead it. They have the right to do that,” said Fox.

“This begs the question about whether Annex 13 is suitable for these types of circumstances, and we've certainly told the families we think it needs to be looked at and revised to take into consideration these very unique types of events.”

Hamed Esmaeilion, a Toronto-area dentist whose wife and nine-year-old daughter were killed on the plane, said victims' families are outraged and won't accept any report that comes solely from Iran.

“Now we see the murderer is writing a report about his murder,” said Esmaeilion, who has become a spokesman for the victims' families and loved ones.

Esmaeilion said he's not optimistic Iran will allow an independent international investigation to unfold now, given its past stalling, and its most recent report that human error led to the January crash.

The report depicted a chain of events where the shootdown could have been avoided. It said that the Revolutionary Guard's surface-to-air missile battery that targeted the Boeing 737-800 had not been properly reoriented after it had been moved. The report said those manning the battery could not communicate with their command centre and that they fired twice on a plane that they misidentified without getting approval from their superiors.

Foreign Affairs Minister Francois-Philippe Champagne rejected the Iranian finding of human error as the cause.

“It cannot just be the result of a human error,” Champagne said in an interview.

“There is no circumstance under (which) a civilian aircraft can be downed just by the result of human error in this day and age.”

The minister called the uploading of the black boxes a long-overdue step in the investigation.

“Iran has been stalling for many, many months now. We have been pushing, we have been raising the issue to the board of ICAO, the International Civil Aviation Organization, asking them to take steps.”

Esmaeilion said investigators need to focus more on the workings of Iran's Russian-made Tor system, known to NATO as the SA-15, which is mounted on a tracked vehicle and carries a radar and a pack of eight missiles.

“The black box is a distraction here. There are more important questions,” he said, including “who kept the sky open and why they (Iran) destroyed the crash site.”

Fox said the Dutch investigation on behalf of Ukraine was credible and answered key questions after 15 months.

“Why was it shot down? Why was the airspace in that time in Ukraine not closed? Why were airplanes still operating out of there? Those are the same questions that people have for this accident,” said Fox.

Champagne acknowledged the flight recorders would form one part, albeit an important one, of a flight-safety investigation and an international criminal investigation to identify the people responsible for shooting down the plane.

Britain, Ukraine, Afghanistan and Sweden also lost citizens when the plane was destroyed, and the countries formed an alliance with Canada to deal with Iran.

Champagne and his counterparts from those countries have been pushing Iran to release the flight recorders and they will continue to push for answers.

This report by The Canadian Press was first published July 20, 2020.