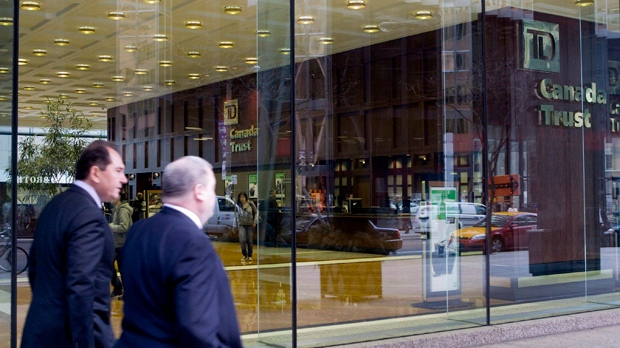 TORONTO -- Iranian Canadians who've had their bank accounts with one of Canada's biggest banks closed, often without notice, say they feel they're being treated as second-class citizens in their own country.

Members of the community say TD Canada Trust began notifying a number of Iranian-Canadian clients in May that it would no longer provide them with banking services.

Some of the letters sent out earlier this month indicated the bank was closing the accounts in order to comply with Ottawa's economic sanctions against the Iranian regime.

Sadeghi says the TD account he shared with his wife and her parents was closed two days before he received a letter from the bank on May 2.

"They went to the grocery store to do some shopping, it didn't work and the next day we received the letter," he said in an interview with The Canadian Press.

"There was no explanation in our letter about why TD was closing the account," he said.

In the past few weeks he found out that many other Iranian Canadians had had their accounts closed in similar circumstances and that the letters sent to them mentioned Canada's economic sanctions.

Many Western countries, including Canada, have imposed tough sanctions aimed at cracking down on Iran's nuclear program. Tehran says it is developing nuclear power for peaceful purposes, but the international community believes it wants to build a nuclear weapon.

Kaveh Shahrooz, vice-president of the Iranian Canadian Congress, says there is worry in the community that the bank's decision may signal "an erosion" of their rights as Canadians.

"It is one thing to punish the Iranian government and its agents," he says. "It's another to close bank accounts without giving people a chance to explain themselves."

Shahrooz says the letters TD sent out to clients did not indicate how that particular individual had violated the sanctions.

In a statement released Thursday, TD said it is required to comply with Canadian bank laws and regulations, "including economic sanctions, which prohibit us from providing financial services to or for the benefit of certain countries, or any person in those countries."

The emailed statement said decisions to end customer relationships are not taken lightly.

"Where we had a concern, we reached out to customers in advance to confirm or correct information in their accounts, via phone and registered mail," said the statement from Barbara Timmins, manager of corporate communications. "In many cases, we did not hear back from them and based on the information on file, we had to apply the regulations and close the accounts."

TD said it could not comment on "specific customer situations."

Senior bank officials have promised to meet with community leaders on July 22 to discuss the matter.

The bank has not publicly revealed how many accounts belonging to Iranian Canadians have been closed, but Shahrooz says they have received complaints from British Columbia to the Maritimes, indicating that this is a country-wide issue.

Rachel Swiednicki, a spokeswoman for the Canadian Bankers Association, says a number of international sanctions prohibiting some financial and business activities with Iranian individuals, banks, companies and government institutions were strengthened in January.

"Each bank develops its own policies and procedures and takes the steps that it feels necessary to ensure that the bank is in compliance with these regulations," she said in an email.

The CBA has no information on what banks are doing to comply with the regulations, she said.

A Bank of Montreal spokesman says the bank has closed or frozen accounts "but only in a very few instances where required."

"BMO carefully assesses the regulations as well as the sanctions that the office of the superintendent of financial institutions publishes on this topic to ensure that our dealings with Iranian Canadians are compliant," said Ralph Marranca.

Sadeghi says that he stays in contact with family members in Iran but has had no financial transactions with them.

He says it took TD representatives one month to reply to his request for an explanation for the account closure. The reply he received said they could not provide an explanation.

Sadeghi has since opened a new bank account with CIBC. He has also created a Facebook group called "Condemn TD Bank in their Treatment of clients with Iranian Background" and says he has received a lot of support.

On the Facebook group, there are a number of posts from people who say they are considering cancelling their TD bank accounts in protest.

"No Canadians should be subject to this. A discrimination and charter challenge should be in place," said one post.

There is also a petition circulating online.