Irving Abella, historian who wrote on Canada's refusal of Jewish refugees, dead at 82 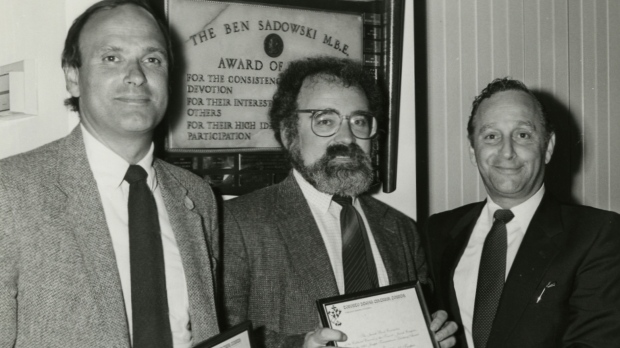 Irving Abella, centre, and Harold Troper accept the Toronto Jewish Cultural Council Writer's Award for None is Too Many, with Meyer Feldman, right, in this May 27, 1985 handout photo. Abella, co-author of "None is too Many," which detailed Canada's refusal to accept Jewish refugees fleeing the Holocaust, has died at age 82. THE CANADIAN PRESS/HO - Courtesy of the Ontario Jewish Archives

Historian Irving Abella, the co-author of a seminal book on the Canadian government's refusal to accept Jewish refugees fleeing the Holocaust, has died.

Abella died on Sunday, the day after his 82nd birthday, after a long illness.

He was born and raised in Toronto, and completed his bachelor's, master's and PhD degrees at the University of Toronto.

His 1982 book “None is too Many: Canada and the Jews of Europe 1933-1948,” co-written with Harold Troper, shed light on the largely untold story of Canada's anti-immigrant policies toward persecuted Jews and helped persuade future governments to welcome migrants fleeing war.

Between the ascension of the Nazi Party in 1933 and the creation of the state of Israel in 1948, Canada accepted just 5,000 Jewish refugees - a legacy that Abella and Troper called the “worst record of any nation in the world.”

That was especially evident in the case of the MS St. Louis, which in 1939 was refused the right to disembark its passengers in Cuba and the United States. Some Canadians attempted to convince prime minister William Lyon Mackenzie King to allow the ship to dock in Halifax, but this was rejected by Fredrick Blair, an official who was responsible for the government's immigration service at the time. Abella and Troper revealed in “None is too Many” that Blair had a particular distaste for Jews and was the architect of highly restrictive immigration policies, done so with the full support of King's Liberal government.

By Abella's own admission, “None is Too Many” was never supposed to be more than an academic text detailing a particularly dark period in Canadian history. It has since become much more than that, not least of which is the entry of the phrase “none is too many” into the Canadian lexicon. In Abella's own words, the book became “an ethical yardstick against which contemporaneous government policies are gauged.”

To that end, advance copies of some of the book's chapters were sent to former immigration minister Ron Atkey in the late 1970s, just as Canadians were debating what, if anything, the country should do about the crisis of Vietnamese refugees who became known as Boat People. After reading those chapters and learning of Canada's deplorable treatment of the Jews of Europe, Atkey vowed to not repeat past mistakes, and Canada welcomed tens of thousands of new citizens.

The book won the 1983 National Jewish Book Award in the Holocaust category.

Abella was also highly critical of Canada's postwar acceptance of thousands of Nazi collaborators and war criminals, particularly the members of the Waffen-SS Galicia Division, which was composed of Ukrainian nationalists and fascists.

In a 1997 interview with Mike Wallace of “60 Minutes,” Abella stated that getting into Canada was relatively straightforward for SS members, as their trademark tattoo indicated that they were reliably anti-communist.

Abella was also the author of “Coat of Many Colours: Two Centuries of Jewish Life in Canada,” an important text chronicling the history of Jews in Canada, as well as several key texts on the history of the labour movement in Canada. He spent his career teaching history at York University, and held the position of Shiff Professor of Canadian Jewish History towards the end of his career.

Abella was active outside of academia as well, as president of the Canadian Jewish Congress from 1992 to 1995, and as chair of VisionTV, a religious television specialty channel.

“Irving Abella was a quintessential Canadian Jewish leader,” said Bernie Farber, former CEO of the Canadian Jewish Congress and presently the chair of the Canadian Anti-Hate Network. “He was wise, articulate, engaging, bold and forward-thinking. His inspirational leadership has become his legacy. For me, he was my mentor and teacher. May his memory always be for a blessing.”