'It is just not right:' City crews to clean up donation bins that have been used for illegal dumping 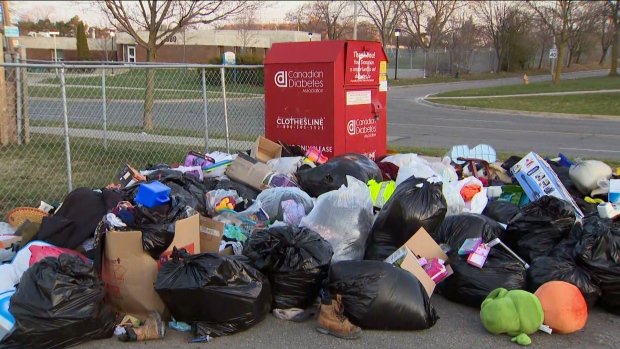 Items and garbage is shown piled up beside a Diabetes Canada donation bin near Renforth Road and Rathburn Drive on Tuesday morning.

City crews will begin cleaning up overflowing donations bins across Toronto following reports that some people were using the sites to illegally dump their garbage.

A spokesperson for the mayor’s office tells CP24 that Mayor John Tory has authorized a blitz of problematic locations and is directing staff with solid waste services and municipal licensing and standards to lead the cleanup efforts.

He said that members of the public are also encouraged to report bins that need to be cleaned up to 311.

The launch of the blitz comes just hours after Diabetes Canada revealed to CP24 that many of their bin locations had been overwhelmed with donations that can’t be picked up during the COVID-19 pandemic and in some have even become illegal garbage dumping sites.

The charity said that residents should still hold onto donations if they can but should not be taking them to drop-off bins until non-essential services are able to resume.

“Sadly, some residents continue to drop off donations at our bins even though we cannot empty them at this time; and some individuals are using Diabetes Canada donation bins to dump garbage and more,” Diabetes Canada said in an open letter. “This is posing a serious health and safety issue. We have contacted government agencies to help us to remove the garbage however we have not yet been successful.”

Diabetes Canada usually raises up to $5 million a year by selling donated items to retail stores including Value Village but with those stores now shuttered to help limit the spread of COVID-19, it has had to pause collections and temporarily lay off 500 staff.

As a result, it says that it does not have employees or the financial resources to clean the garbage around its bins.

One of those bins, located near Renforth Road and Rathburn Drive, was filled beyond capacity on Tuesday morning when CP24 visited the site with hundreds of items stacked up on the ground surrounding it.

“We need help with this,” Diabetes Canada CEO Sean Shannon told CP24 earlier on Tuesday morning. “We are putting our hand up to all levels of government to say this is a COVID-19-related crisis and we need your help to actually clean this up.”

In an interview with CP24 before the cleanup blitz was announced, Tory said that he has been “staggered” by the reports of widespread dumping at sites operated by charities that provide an important service.

Tory said that he believes some of the people dumping trash at the sites may be doing so because they are producing more garbage now that they are home and have filled up their own bins. He said that for that reason he has asked staff about the feasibility of allowing residents to put out extra garbage for pickup at no extra cost, at least on a temporary basis.

“It is just not right. We are in an emergency here,” he said of the situation with the Diabetes Canada bins.