'It makes me nervous:' Ford concerned about children being allowed to go door-to-door this Halloween 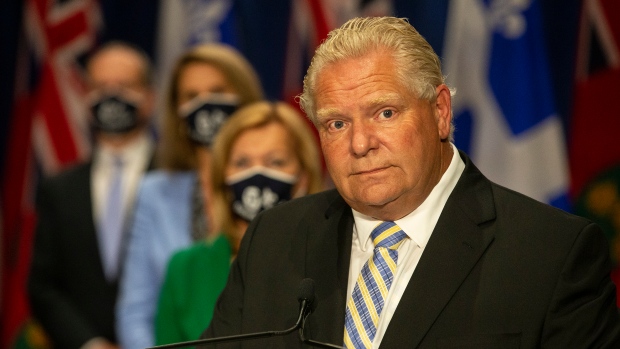 Ontario Premier Doug Ford, right, stands in front of a selection of his cabinet ministers during a joint press conference with Quebec Premier Francois Legault at the Ontario-Quebec Summit, in Toronto on Wednesday, September 9, 2020. THE CANADIAN PRESS/Chris Young

Premier Doug Ford says that the thought of children heading out trick or treating next month amid a global pandemic makes him “nervous” but he is cautioning residents that a lot can still change between now and Halloween.

Earlier this week officials in Los Angeles County announced that they would prohibit trick or treating and urge residents to instead organize online parties or car parades to mark the occasion.

Similar action has not been taken by any Canadian municipalities so far, though Mayor John Tory told CP24 earlier this week that he “wouldn’t hesitate” to ask Torontonians to abandon their trick or treating plans this year if health officials deem the tradition too risky.

Speaking with reporters during his daily COVID-19 briefing on Thursday, Ford said that it is too early to make a decision about what will be done about Halloween in Ontario but he conceded that the idea of trick or treating does worry him.

“Let’s play it by ear and see what happens over the next month-and-a-half but it makes me nervous, kids going door-to-door with this. I would prefer not to,” he said.

Ford said that it would be “a shame” to have to discourage children from going door-to-door this Halloween but he said that there is also need to be careful, especially amid a rising number of COVID-19 infections.

He said that while things could improve between now and Halloween, they could also get worse.

“A month-and-a-half is a long time when it comes to COVID,” he said. “When you look back a month-and-a-half ago or even a few weeks ago we were below 100 (new cases a day) but now it has spiked up and it is almost double.”

Speaking with reporters during his regular briefing at Queen’s Park on Thursday afternoon, Ontario’s Chief Medical Officer of Health Dr. David Williams said that discussions are very much ongoing regarding what to do about Halloween.

He said that he is hopeful that some Halloween events can go ahead with “some direction” but did not comment on whether trick or treating could be one of them.

“I still have to be advised by my public health measures table as they look at the various nuances of Halloween and Halloween celebrations and activities,” he said. “It isn’t just trick or treating, there are other events and things that take place at the same time that could be potentially spreading COVID. Maybe with some proper guidance and direction some activities could still be allowed.”