'It's going to be crazy': Snowbirds at campground eager for U.S. border reopening 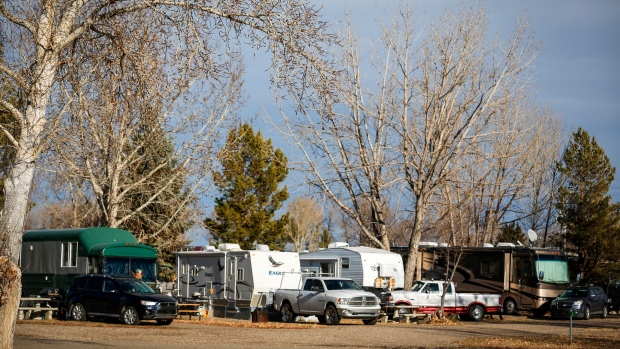 Two years of captivity have Canadian snowbirds anxiously waiting in their RV's near the US border to head south for the winter, in Milk River, Alta., Thursday, Nov. 4, 2021. THE CANADIAN PRESS/Jeff McIntosh

MILK RIVER, Alta. - Nearly two years of being caged in Canada during the COVID-19 pandemic has some snowbirds anxiously waiting in their motorhomes and trailers in southern Alberta.

The Eight Flags Campground in the small windswept town of Milk River, 18 kilometres from the Canada-United States border crossing at Coutts, is full of shiny, large RVs.

It's in anticipation of land and sea border crossings reopening Monday for fully vaccinated Canadians. Such crossings were closed to non-essential travel at the beginning of the pandemic in March 2020.

“All of a sudden someone said the border's opening and it just went nuts here,” said Helen Runka, who operates the campground.

“They said they've been waiting to go back to the U.S. for two years and they're not going to miss out.”

The campground, which has 35 sites, has twice the number of bookings for this weekend. Some overflowparking is being offered near a baseball diamond in the town.

Runka said it's surprising how long some of her guests have been waiting.

“The one over there on Site 3 will have been here 18 days by the time he goes over the border,” she said.

“The other ones from Saskatchewan and Ontario ... they're only here for 14 days.”

Donna Call and her husband from Calgary pulled into the campground on Oct. 21 on their way to Brenda, Ariz.

“It will have been 17 days we're going to be here,” said Call, as she sat a picnic table next to her RV. The vehicle's front Arizona licence plate reads “Desert Rat.”

Even the Alberta weather has made her long for the sunshine of Arizona, she said.

But she said they don't plan to be lining up at the border on Sunday night.

“If my husband had his way, probably. But we're going to leave around 5 a.m. (Monday). I'm just hoping it's not backed up all the way to here before we try and pull out,” she said, pointing to a nearby highway.

“You never know. People could be sitting there at midnight.”

Don Breckenridge from Langham, Sask., said he had hoped to be pulling into an RV parkin Las Vegas on Oct. 31. So he's growing anxious.

“If you look at the weather up here, it happens to be extremely cold at night,” Breckenridge said.

“It's just going to be a zoo in here the last night before it opens. It's just because people want to get down before it's really snowing bad.”

One camper, 23-year-old Otto Miantz, has been touring Canada since leaving the Danish Royal Marines four months ago.

He now wants to visit the U.S.

“Just driving around this one,” he said knocking on the top of his car, “hiking and sleeping out basically.”

Miantz plans to meet a friend in Montana then drive through Idaho and Washington before crossing back into Canada to Vancouver.

He said he wants to get up early to be one of the first ones across the border Monday.

“I'm expecting a lot of people to be down there. It's going to be crazy.”

This report by The Canadian Press was first published Nov. 6, 2021.