'It's not just about me': McKenna cites need to protect politicians from threats 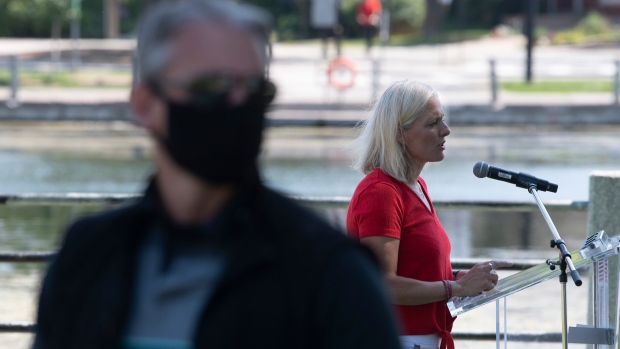 A member of the RCMP surveys the area as Infrastructure and Communities Minister Catherine McKenna speaks during an announcement along the Rideau canal, in Ottawa, Thursday, Aug. 13, 2020. THE CANADIAN PRESS/Adrian Wyld

Her comments come after police launched an investigation this week into an incident at her constituency office, as well as reports that two other Ottawa-area politicians also faced threats recently.

McKenna, who has spoken out in the past about being a target, said she's heard from many politicians who have experienced similar incidents, some never reported publicly.

“It's not just about me. There's been some attention to incidents involving me, but I've heard from so many women, from so many men, and it's really worrying,” she said Thursday in Ottawa.

“We need to reflect on this and take action so we can all do our jobs.”

Earlier this week, a police investigation was launched after someone yelled obscenities at a member of McKenna's staff, with the footage posted to social media.

After being told the constituency office in downtown Ottawa was closed due to COVID-19, the individual yells expletives and insults at the employee about McKenna and Prime Minister Justin Trudeau.

According to data from the RCMP, first reported by the Toronto Star, there has been an increase in the number of threats made against the prime minister and cabinet when compared to last year.

Following the incident at McKenna's office, Lisa MacLeod, a member of the Ontario legislature for an Ottawa riding and provincial cabinet minister, gave an interview on local radio condemning the abuse.

She then received threats of her own, her spokesman confirmed Thursday.

“Minister MacLeod is once again receiving police protection due to both threatening emails and an unexplained mischievous incident to her personal vehicle in Ottawa,” Derek Rowland said in an email.

In March of 2019, a woman was charged with making threats against MacLeod, and she was given a police detail, during controversy around changes to the province's autism strategy. She was in charge of that file at the time.

Last week, Laura Dudas, an Ottawa city councillor, had a rock hurled through a window of her home while her family was asleep.

“While I cannot speak to the motivations of the person behind this disturbing act, it comes as the latest in a string of acts targeting my role as a woman in politics,” she said in a statement posted to social media Thursday.

“There are too many reports of women politicians being the recipients of vicious online abuse, derogatory comments about their gender, and when online vitriol spills into the real world, violent physical attacks. This has to stop.”