'It's still surreal': Authorities look for cause of deadly glacier bus crash 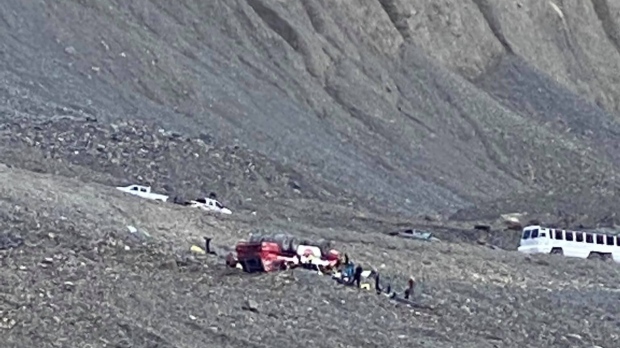 RCMP in Alberta say there are reports that multiple people are injured after a bus, similar to the vehicle pictured, rolled over on a highway that runs between Jasper and Banff National Parks. Responders attend to a rolled-over icefield touring bus in Jasper National Park, Alta., in a handout photo taken Saturday, July 18, 2020. THE CANADIAN PRESS/HO-Randy Cusack,

COLUMBIA ICEFIELD, Alta. - Angela Bye couldn't believe her eyes when she used her camera's telephoto lens to get a closer look at what appeared to be one of the massive glacier sightseeing buses overturned on the approach to the Columbia Icefield, one of the prime tourist spots in the Canadian Rockies.

Three people were killed and 14 others suffered critical injuries when the off-road bus rolled Saturday afternoon and came to rest on a rocky slope, its six huge monster-truck tires pointed up to the sky.

Bye, who's from Calgary, and her husband had taken the icefield tour earlier in the day. Her husband pointed out the crash.

“I took my camera and zoomed as far as it could go and I'm like 'yeah, it is wheels up.' I could see even more stuff and realized they were still getting people out and I was shocked at that point to realize this has just happened,” Bye said.

“It's still surreal for all of us. We're probably all still in shock as to what happened and that's why it hasn't hit that it could have been us.”

Work was underway Sunday to remove the bus from the rollover site so it could be further inspected. Trucks with flatbeds were brought in, but RCMP Sgt. Rick Bidaisee said more equipment would likely be needed.

At least one witness has said he believes a rockslide may have played a role in the crash, but Bidaisee said it's too early to know exactly what happened.

“We're at the infancy stage of the investigation and all steps are being taken to determine the cause of the rollover,” he said.

The iconic red and white big-wheeled buses have taken tourists up a rough rocky road onto the Athabasca Glacier in Jasper National Park since the early 1980s. They carry nearly half-a-million passengers in a normal year.

Dave McKenna, president of Pursuit, the company that runs the tours, said the fleet is completely refurbished each winter season. There are no seatbelts, but the vehicles are designed so they don't travel more than 40 km/h.

He said this is the first serious crash in the company's history.

“Over 39 years, of course there's a few bumps, but nothing serious with fatalities or critical injuries,” McKenna said.

“We have had ... 16 million passengers taken out onto the ice over all these years. It's a favourite of literally millions that have come here to visit, so we are deeply saddened with this tragedy.”

In all, 27 people - 26 sightseers and one driver - were aboard when the bus crashed. The buses can typically hold more than 50, but are running at reduced capacity because of the COVID-19 pandemic.

Alberta Heath Services said that of the 24 survivors, 14 had life-threatening head or pelvis injuries. Five others were in serious condition with broken bones and the remaining five suffered minor injuries.

None of the passengers has been publicly identified. Police have only said that the three dead were adults. McKenna said the driver was among the injured.

The Columbia Icefield is picturesque but remote, situated about an hour from Jasper on the Icefields Parkway, which runs between Banff and Jasper national parks. Cell service is spotty in the area.

Officials released more information Sunday about the mammoth rescue effort that happened after the crash.

The bus rolled as it approached the Athabasca Glacier, far from the main highway.

The response to the accident involved 28 ground ambulances, fixed-wing air ambulances, and helicopters.

They came from all over the province.

With no road access for conventional vehicles to reach the crash site, health officials say patients were triaged and treated near the bus before being airlifted from the scene to waiting ambulances at a nearby staging area.

Nineteen of the 24 patients were then either helicoptered or driven to the Jasper-Hinton airport, where they where transferred to medical planes for flights to big-city trauma centres.

Hospitals in both Edmonton and Calgary were put on “Code Orange” alert so that they were prepared for the high number of patients.

The first ground ambulance arrived from Jasper at 3:17 p.m. local time, and the last patient was transported from the scene at 8:43 p.m.

In a tweet Sunday, Prime Minister Justin Trudeau expressed his condolences to those affected by the wreck.

“To those who lost a loved one in yesterday's bus crash at the Columbia Icefields, know that we are here for you and are keeping you in our thoughts,” Trudeau said.

The crash has put further tours on hold for the time being. McKenna pledged to follow any recommendations that come out of the investigation.

Parth Bala drove 27 hours from Toronto to the Canadian Rockies and had planned to take the tour Sunday. He said the cancellation was a disappointment, but he'd happily ride a bus in the future.

“Lightning doesn't strike the same spot twice in a row so we're going to see how the professionals assess the situation and when it's safe to do so we will assess at that point.”