'It was like a bomb went off,' resident says of mess from west-end mac and cheese festival

The organizers of a Mac and Cheese Festival in Liberty Village are apologizing after garbage from the event was left strewn over the neighbourhood overnight.

Residents in the west-end neighbourhood woke up on Sunday to find piles of mac and cheese containers and other debris overflowing from garbage cans and spread over the sidewalks in and around the Liberty Market courtyard where the three-day event was held.

The garbage wasn’t fully cleaned up until midway through Sunday morning.

“I went to get my morning coffee, typical weekend routine, and it was just like a bomb went off,” resident Kellie Davenport told CP24. “There was food on tables, there were piles of vomit, there were wrappers, litter, everything and having to walk over that kind of trash is not really ideal. I understand the event was success and I love events like that coming to Liberty Village; I just wish there had been proper plans and contingency plans in place for adequate cleanup.”

The Mac and Cheese Festival, which is in its first year, came to an end at 11 p.m. on Saturday night and Davenport told CP24 that she assumed clean up would have been completed overnight like “any other street festival in Toronto.”

An organizer for the festival, however, said that the event was faced with a last-minute staffing shortage that delayed the cleanup until 10 a.m.

“It was unfortunate. We had a few staff that weren’t able to show up and what not so we were left scrambling as to who would be available for cleanup,” Philip Suos said. “It’s year one, we know we made mistakes but we are going to have a major crew cleaning up (tonight) and everything will be cleared by Monday morning.”

According to Suo, 35,000 people attended the Mac and Cheese Festival on Friday and Saturday. The event will be held again from 12 p.m. to 4 p.m. today. 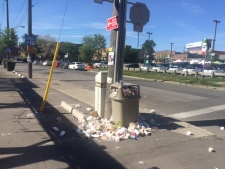 Garabge is shown overflowing from a trash receptacle in Liberty Village on Sunday following a mac and cheese festival in the neighbourhood. (Kellie Davenport)