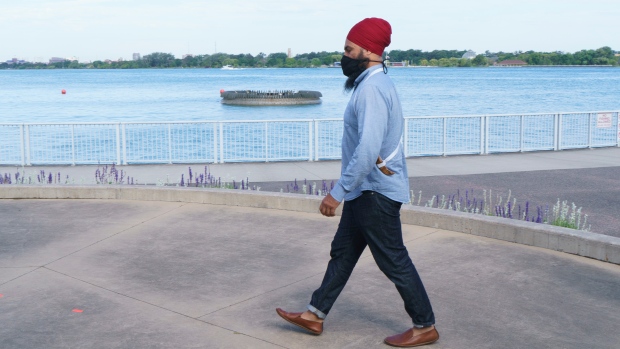 NDP leader Jagmeet Singh walks to a news conference along the waterfront in Windsor, Ontario on Wednesday, August 25, 2021. THE CANADIAN PRESS/Paul Chiasson

OTTAWA -- Dozens of election signs of four Liberal candidates in Ontario and Quebec have been vandalized with anti-Semitic graffiti while NDP Leader Jagmeet Singh had racist remarks shouted at him.

Liberal candidate Anthony Housefather said another 20 of his election posters were found Tuesday with swastikas drawn on them.

The posters of Housefather and Liberal candidate Rachel Bendayan, who are both Jewish and running for re-election in Montreal, have been the subject to anti-Semitic vandalism since last week.

He said this kind of vandalism distracts him and his team from what they should be focusing on during the campaign as they have to replace the posters and report it to police.

"It's like a punch in the gut kind of thing. It's hurtful," he said.

Newmarket-Aurora Liberal candidate Tony Van Bynen posted photos on Twitter of his election signs with swastikas and the word "Nazis" sprayed on them.

"I am sorry to members of the Jewish community who had to see these signs," he said in the tweet.

"I was deeply disturbed to learn from (York Regional Police) that my signs were defaced with anti-Semitic graffiti," Leah Taylor Roy said on Twitter Tuesday.

NDP Leader Jagmeet Singh had a racist remark directed at him while campaigning on Wednesday in Windsor, Ont.

During a campaign event in a park, a man shouted "go back home" from a passing vehicle, while Singh, who was born in Scarborough, Ont., and raised in Windsor, continued his speech undeterred.

Speaking to reporters in a later news conference, Singh says he doesn't "focus on himself" when that kind of thing happens but he is concerned about the growing level of hate in Canada.

"I do think about the rise of hate that a lot of people have to face," he said.

"I'm worried about, people from the Muslim community who are worried because of the attacks on Muslims, and the rise of hate. I'm worried about anti-Semitism, we've seen attacks on synagogues, attacking and targeting Jewish people."

Housefather, who has won eight elections, becoming a Montreal city councillor three times, a mayor three other times and an MP twice, said he had never seen his posters vandalized with swastikas before.

He said politicians like him are used to having "thick skin," but those who haven't run in an election before or are thinking of running could give up on politics because of the toxicity.

"Members of minority communities would see this. I think it may cause people to say, 'I don't want to go into that business,' no matter how talented they are, because they don't want to see things like that happen to them," he said.

He says anti-Semitism, Islamophobia and Black and Asian racism are all on the rise in Canada, noting the growth of hate on social media before it manifests itself on the streets with graffiti and racial slurs.

"People seem, for whatever reason, much more free to express negative sentiments towards minority communities," he said.

Singh also said much of the hate against minority communities is being fed by misinformation online.

Housefather pointed out that the Liberal government introduced a new law shortly before the House of Commons rose for the summer that it said would force social media companies to remove hate speech and any statements that are illegal in Canada. It also committed the government to work with companies to ensure they remove content that violates their own policies.

The bill died when the election as called. But Housefather said the issue will remain a priority for him and his party.

A survey of 2,000 Canadian residents by Abacus Data for the Canadian Race Relations Foundation in January found that 78 per cent of respondents are concerned about the spread of hate speech online and 60 per cent say the federal government should do more to prevent the spread of hateful and racist comments online.

A spokesperson of Facebook Canada wasn't available for an official comment on the story but shared some information and data on the company's efforts to fight hate speech on its platform.

The company's data shows it had removed 31.5 million pieces of content for violating Facebook's hate speech policies in the second quarter of this year alone.

Facebook says it welcomes "thoughtful regulation and stand ready to work with Canadian policy-makers to develop and pass necessary legislation."

In October, Facebook said it will ban content that denies the Holocaust. The company has been working with the Centre for Israel and Jewish Affairs and the Canadian Jewish Holocaust Survivors and Descendants to address anti-Semitism.

This report by The Canadian Press was first published Aug. 25, 2021.