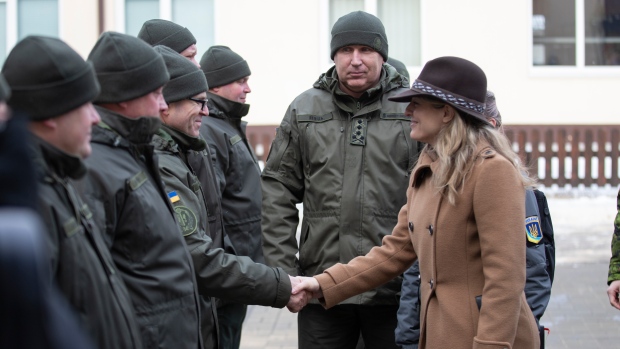 Joly wrapped her two-day trip to Ukraine, the first leg of a three-country continental tour that will include stops in France and meetings with European Union and NATO leaders in Brussels.

Her talks with Canada's allies come as fears of a Russian invasion of Ukraine are running high in Europe.

“The goal is to make sure that we contribute to their increased capacities, capabilities in light of the Russian threat, and also a further invasion of Russia,” Joly told a joint press conference in Kyiv with her Ukrainian counterpart Dmytro Kuleba.

“We've heard loud and clear the demands on the part of the Ukrainian government,” she added. “We know that it is important to play our part â€¦ and therefore we're looking at options and we'll take a decision in a timely manner.”

Canada's Ukrainian diaspora - an influential constituency in domestic political affairs numbering 1.4 million - has asked Ottawa to supply arms to Ukraine to help it defend against a possible Russian invasion.

“It is very important that Minister Joly was in Kyiv these last days to hear first-hand from Ukrainians on the urgency of the need to provide Ukraine with more defensive weapons,” Ihor Michalchyshyn, the executive director of the Ukrainian Canadian Congress, said Tuesday.

“Canada should be providing defensive weapons to Ukraine immediately, as a deterrent to the increasing threat of a further Russian invasion of Ukraine, rather than in response to a further invasion, should one come. War must be made more expensive for Russia than peace.”

In Ottawa, Prime Minister Justin Trudeau spoke with some of his key ministers and officials about the situation in Ukraine.

A readout of the call said they condemned Russia's military buildup in and around the country as well as Russia's annexation and illegal occupation of Crimea. They underlined the need for Russia to de-escalate the situation, uphold its international commitments, and the need to find a peaceful solution through dialogue.

“Prime Minister Trudeau emphasized that any further military incursion into Ukraine would have serious consequences, including co-ordinated sanctions,” said the readout.

NDP Leader Jagmeet Singh said Tuesday he was not in favour of arming Ukrainian troops, saying targeted sanctions were a better option.

“I am concerned about going down the path of arming and military presence. I don't want to escalate a situation that is already quite tense,” Singh said.

Russia has positioned about 100,000 troops on Ukraine's eastern border along with tanks and other heavy artillery, but has denied it intends to invade Ukraine.

Russia has demanded assurances from NATO that Ukraine will not be allowed to join the 30-country transatlantic military alliance, but Canada, the United States and their allies have firmly rejected that demand.

“Russia's military buildup around Ukraine is unacceptable. Russia is the aggressor,” Joly said, adding that Canada stands “shoulder to shoulder with Ukraine.”

She spoke after visiting with Canadian troops taking part in Operation Unifier, which is helping train Ukrainian forces.

The Ukrainian government has pressed Canada to extend the military training mission beyond its late March end date, and Joly suggested Canada will continue that modest contribution to bolstering Ukraine's forces.

“And that's why it's important for Canadians to understand that our commitment to the professionalism of the National Guard and the Armed Forces of Ukraine is long-standing and will continue in the future,” she said.

Joly heads next to Paris and Brussels for further talks with Canada's allies. She will meet with her French and EU counterparts, Jean-Yves Le Drian and Josep Borrell, as well as NATO Secretary-General Jens Stoltenberg.

Joly said Canada wants to work with allies on a diplomatic solution with Russia that would include talks with international organizations like NATO and the Organization for Security and Co-operation in Europe.

U.S. Secretary of State Antony Blinken will travel to Kyiv for talks on Wednesday with Kuleba and President Volodymyr Zelenskyy.

“The past week of diplomacy proved the strength and unity of Europe against the background of Russian ultimatums,” Kuleba said Tuesday.

“Now the question is, what's next? I am convinced that the only way for Russia to prove that it does not really plan a new attack on Ukraine is a continuation of its discussion within existing formats.”