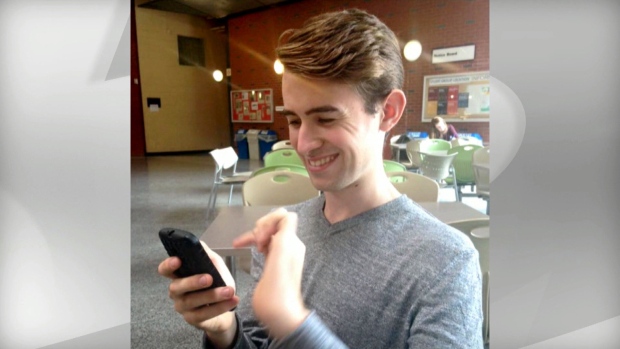 A 21-year-old man accused in the death of Tess Richey in 2017 was denied bail in a packed Toronto courtroom on Monday morning.

Kalen Schlatter was first arrested and charged with second-degree murder in February. That charge was later upgraded to first-degree murder in March after police uncovered “new evidence” in the case.

Superior Court Justice Brian O’Marra denied Schlatter’s request for bail pending his preliminary hearing and trial. After combing through his application, O’Marra concluded that “the continued dentition of Kalen Schlatter is necessary to maintain confidence in the administration of justice.”

When the decision came down, a woman in the courtroom began sobbing loudly. It’s believed she’s a family member of the accused.

Richey’s sisters were not in court for the hearing but in a phone call with CTV News Toronto, her older sibling commended the judge for his ruling.

“Obviously it doesn’t bring back Tess and the process doesn’t end here, but at least we feel that the right decision has been made,” Varina Richey said.

“I of course feel that the judge has made the correct decision in denying the accused bail,” she wrote earlier on Twitter. “I would now like to [sic] focus to go back firmly where it belongs: on Tess and what she lost, on the loss for Tess' immediate family and friends but also on what the world lost when she was stolen.”

Another sibling, Hailey Richey, had few words, simply writing “tears of joy and grief” on Facebook.

Richey’s family reported her missing on November 25 when she failed to return home after a night out with a friend in the city’s gay village, known formally as the Church-Wellesley neighbourhood.

Four days later, the 22-year-old’s mother found her daughter’s body at the bottom of an outdoor stairwell at a building under construction, steps away from where she was last seen.

Police have previously said Richey and Schlatter likely met for the first time that night.

They allege she died of “neck compression,” though none of the allegations have been proven in court.

Richey’s disappearance and subsequent death was one in a series of missing persons cases that gripped the neighbourhood over the past year. Other notable cases include the investigation into Bruce McArthur, which has resulted in eight first-degree murder charges, and the death of transgender woman Alloura Wells.

Toronto police have faced harsh criticism for their response to missing persons cases in the area.

Two police officers have since been charged with neglect of duty and insubordination under the Police Services Act in connection with Richey’s case. They’ve been accused of failing to properly search for Richey when she was first reported missing.