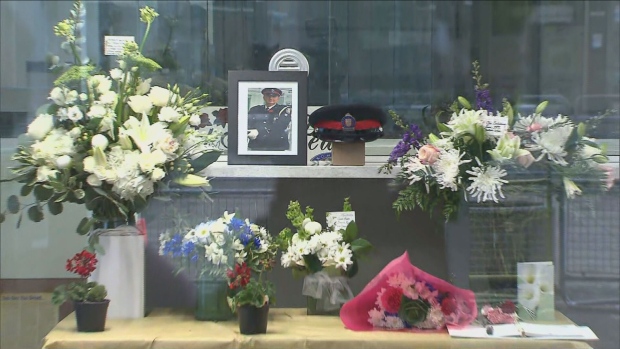 A memorial for Const. Jeffrey Northrup is seen here.

TORONTO - A judge has denied a request to partially lift a publication ban in the case of a man accused of killing a Toronto police officer.

Umar Zameer, who made the request late last year, has been charged with first-degree murder in the death of Const. Jeffrey Northrup.

The 55-year-old officer died on July 2 after being struck by a vehicle as he was responding to a report of a robbery in a parking lot at Toronto City Hall.

Justice Jill Copeland granted Zameer bail in September, but the reasons for her decision and evidence presented in court are covered by a standard publication ban, which the defence had requested.

Zameer sought to lift parts of the ban to address what his lawyer called a “misleading” narrative presented to the public.

That came after Toronto's police chief had called Northrup's death an “intentional and deliberate act” at a news conference the day the officer died, and after Premier Doug Ford and Toronto Mayor John Tory criticized the decision to grant Zameer bail.

Zameer's lawyer, Nader Hasan, says he is disappointed with the ruling released today.