Judge mulls reopening hate trial for Your Ward News editor; no sentence yet 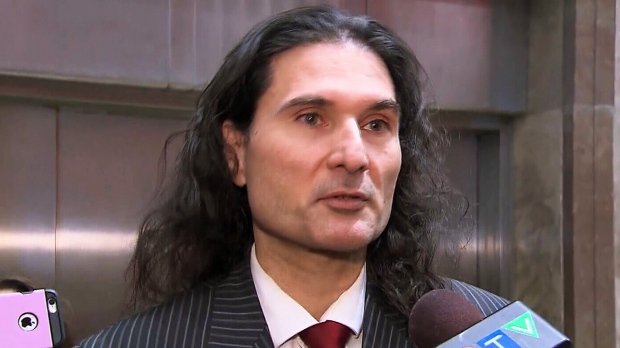 TORONTO - A convicted hatemonger who maintains his defence lawyer deliberately blew the case will get a rare chance to show why his trial should be reopened, a judge ruled on Monday.

Instead of sentencing James Sears for promoting hatred against women and Jews, Ontario court Judge Richard Blouin said he would instead allow the editor of Your Ward News to argue his lawyer, Dean Embry, failed to defend him properly by refusing to call any witnesses.

“You've made the argument that Mr. Embry basically threw the case,” Blouin said to Sears. “That's an issue I'm going to have to decide.”

Sears, 55, was found guilty in January and made sentencing submissions in April. He fired Embry, who denies any wrongdoing, in May and now represents himself.

Sears gave several reasons for Blouin to either reopen the trial or declare a mistrial. The judge, however, focused on Sears' view that Embry, didn't do his job. While the Crown argued Sears' allegations were without merit, Blouin said he had no choice but to hear them.

The judge gave Sears two weeks to provide a list of proposed witnesses, their credentials, and what they would testify to. He said he would then decide whether to reopen the trial to hear those witnesses, declare a mistrial, or proceed with sentencing.

“My overarching obligation is to ensure a fair trial,” said Blouin, who is retiring at the end of August. “I'm allowing Mr. Sears an opportunity to satisfy me that this is an exceptional case.”

Sears waived solicitor-client privilege to allow Embry to discuss the case but in an interview the lawyer said he would respond to the allegations once he has specifics.

“I'm not sure who he's talking about,” Embry said. “Those are the sort of details that he hasn't given at this point in terms of who he wanted to call that I allegedly prevented him from calling.”

Sears and co-accused, publisher LeRoy St. Germaine, 77, were convicted of promoting hatred against women and Jews in Your Ward News. The free Toronto-based publication was distributed to more than 300,000 homes and businesses as well as having an online presence. The publication consistently portrayed women and Jews in beyond ugly terms.

The Crown wants a total one-year jail term for Sears, who now returns to court on Aug. 1. Embry, before he was fired, had argued for a four-month conditional sentence.

Separately Monday, the prosecution urged Blouin to jail St. Germaine for a total of six months. The publication, which became more vile over its three years, had a profoundly negative impact on recipients, Crown lawyer Erica Whitford said.

St. Germaine, who has shown little remorse, was less culpable than Sears, author of most of Your Ward News content, she said.

“He seems to have been led by Mr. Sears,” Whitford said. “(But) he has admitted he does have final say over the contents.”

The prosecution also called for two years probation, and wants St. Germaine barred from contact with Sears and from publishing any material that disparages Jews or women.

St. Germaine, whose Metis background has to be taken into account by the court in sentencing, has a criminal record from decades ago, including for break and enter, court heard.

Defence lawyer Ian McCuaig called for a suspended sentence or, at most, a total of two months house arrest. He cited his client's health issues as well as his unstable family background for turning him into an angry man.

“It's lashing out,” said McCuaig, who argued the number of people who complained to police about Your Ward News was “shockingly low.”

St. Germaine, who has a Grade 8 education, told Blouin that those offended by Your Ward News “were told to be offended” and blasted the prosecution as a waste of money. He has undertaken not to publish again and wants to break with Sears, according to a pre-sentence report.

Blouin, who suggested a reconciliation meeting between St. Germaine and some of his victims, said he would set a sentencing date Aug. 1.

Sears, a married father who was found guilty of sexual assault in the 1990s and lost his medical licence over sexual impropriety with female patients, said he saw no need to hire a new lawyer.