Jupiter will be at its brightest Monday. This is how to see it in Ontario. 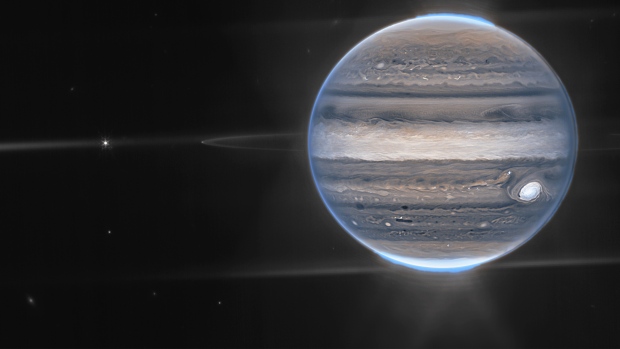 This image provided by NASA shows a false color composite image of Jupiter obtained by the James Webb Space Telescope on July 27, 2022. The planet's rings and some of its small satellites are visible along with background galaxies. (NASA via AP)

Jupiter, the largest planet in our solar system, is going to be the closest it has been to Earth in almost 60 years Monday night.

Rachel Ward-Maxwell, Ph.D., Researcher-Programmer, Astronomy & Space Sciences at the Ontario Science Centre told CTV News Toronto the gas giant is at its opposition, which means it is directly opposite the Sun from what we can see on Earth.

The last time Jupiter was this close to the Earth was 59 years ago, in 1963, and Ward-Maxwell says the next time this will happen will be in 2129.

“The next opposition will occur in November 2023,” Ward-Maxwell said. “But the time when it’s at both its brightest and its closest will be over 100 years until it’s as close as it is now.”

While on Monday night the planet will be at its brightest, stargazers will still be able to see Jupiter shine brilliantly over the next few nights. The planet will even be visible well into early 2023.

HOW CAN I SEE JUPITER?

Jupiter will be visible in the eastern sky shortly after the Sun sets at 7 p.m. EST, according to Ward-Maxwell, and it will get higher and higher in the sky as the night carries on.

However, clear skies and unobstructed views will be best for viewing. According to the Weather Network, the forecast for Toronto calls for rain, and some cloudy skies, starting at around 10 p.m.

Since Jupiter will be so close, you will be able to see it without using a telescope or binoculars. But if you do have either of these, there will be some added bonuses.

“If you do have a good pair of binoculars or a telescope – it doesn’t have to be a very powerful one – even so, you would be able to see some of the details or the features of Jupiter,” Ward-Maxwell said. “Jupiter is a gas giant planet, it has different coloured cloud tops… you can see different cloud bands and different colours and the Great Red Spot, a giant storm on Jupiter.”

Stargazers with binoculars can even see Jupiter’s four largest moons, too.

Outside of Jupiter, Ward-Maxwell says Mars and Saturn will be visible in the sky, though they won’t be as bright.

WHERE CAN I SEE IT?

“Even if you’re in a light-polluted city, it is going to be so bright that you’ll certainly be able to see it brighter than any stars in our main sky,” Ward-Maxwell said.

If you’re planning on seeing Jupiter as the Sun rises or when it’s low in the eastern sky at sunset, finding a spot with a high elevation that isn’t blocked by any surrounding trees or buildings will be key.

Ward-Maxwell recommends going to any nearby park, or if you’re in Toronto, to go to the Beaches by the lake to catch a glimpse of Jupiter.

“I think even if you could go for a walk down the street and find a clear, clear view of the southeastern sky … you’ll be able to spot it,” she said. “You won’t have to go too, too far, because it’s going to be very bright and very high.”