Fans excited to see Justin Bieber in concert tonight will have to make other plans.

The pop superstar was slated to perform at the Scotiabank Arena in downtown Toronto on Tuesday and Wednesday night but has announced those shows will now be postponed.

“I’ve done everything to get better but my sickness is getting worse. My heart breaks that I will have to postpone these next few shows (doctors orders).”

It’s unclear exactly how many shows are postponed.

The entirety of Bieber’s Justice World Tour 2022 had been postponed twice before due to the COVID-19 pandemic.

Bieber’s name was trending on Twitter Tuesday afternoon and more than a few tweets appear to suggest fans with tickets are not happy about the last-minute news.

Scotiabank Arena issued a statement on Twitter regarding the pair of cancelled Toronto shows and said existing tickets will be honoured when rescheduled dates are announced.

The Arena added that Bieber’s illness is not related to COVID-19. 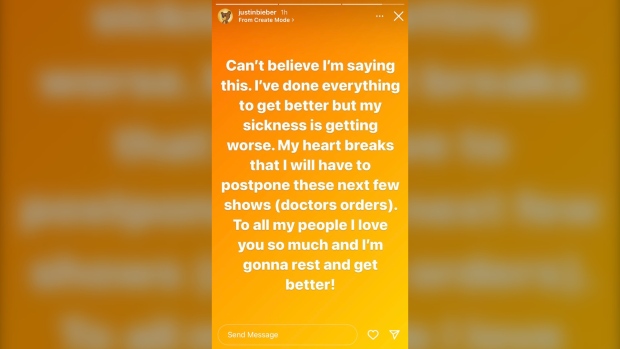