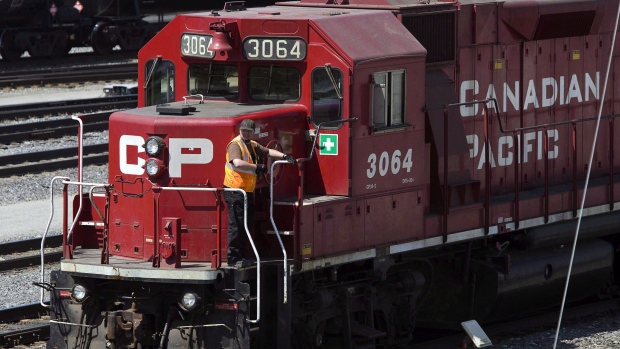 A Canadian Pacific Railway employee walks along the side of a locomotive in a marshalling yard in Calgary, Wednesday, May 16, 2012. THE CANADIAN PRESS/Jeff McIntosh

Under terms of the agreement announced Thursday evening, Montreal-based CN Rail will pay US$200 cash and 1.129 shares of CN stock for each of Kansas City's 90.9 million shares and assume US$3.8 billion of KCS debt.

“We are delighted that KCS has deemed CN's binding proposal superior, recognizing the many compelling benefits of our combination and expressing confidence in CN's ability to obtain the necessary approvals and successfully close the transaction,” stated CN chief executive JJ Ruest.

“Our proposal offers a clear path to completion and is structured in a way that gives KCS shareholders both greater immediate value and the opportunity to participate in the future upside of the combined company.”

The offer represents a 45 per cent premium over KCS's closing stock price on March 19.

Kansas City shareholders are expected to own 12.6 per cent of the combined company.

The U.S. railway said it has notified CP Rail that it intends to terminate its agreement after determining that CN's revised proposal constitutes a “superior proposal.”

CP Rail now has the right to amend its offer, with the KCS board determining if any new proposal constitutes a better one than CN's.

“This doesn't make it any more likely that the CN proposal can close into a voting trust,” the railway said after rumours of a revised deal emerged Thursday afternoon.

“We believe that CP's negotiated agreement with KCS is the only true end-to-end Class 1 combination that is in the best interests of North American shippers and communities. CP-KCS is a once-in-a-lifetime opportunity to not only protect all existing shippers options but to inject new competition and capacity into the North American transportation system.

“Our mutually negotiated agreement with KCS represents compelling short term and long term value for shareholders that is achievable.”

CP Rail chief executive Keith Creel said two weeks ago that his company had no plan to increase its offer because he believed its offer is more likely to be approved by regulators.

However, transportation analysts expected the smaller of Canada's two main railways will have to increase its bid.

Either transaction would connect ports and railways in the United States, Mexico and Canada.

CN's updated transaction is subject to approval by KCS shareholders, approval by the U.S. railway regulator of a voting trust and other regulatory approvals.

CN Rail said it is seeking approval from the Surface Transportation Board for a voting trust and trustee that is identical to the one approved by the regulator for CP's proposed acquisition.

It said the CN voting trust is expected to close in the second half of 2021, with the total transaction expected to be completed about a year later.