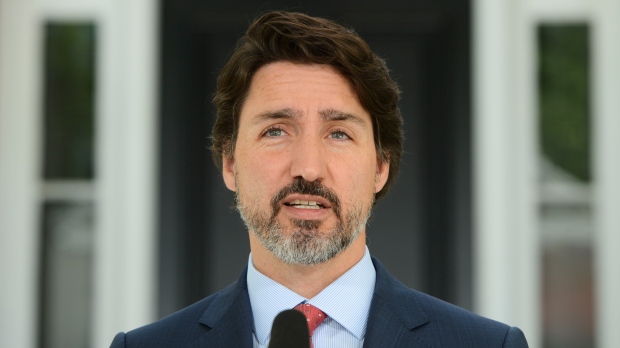 Prime Minister Justin Trudeau sports a fresh haircut as he holds a press conference from Rideau Cottage amid the COVID-19 pandemic in Ottawa on Tuesday, June 16, 2020. THE CANADIAN PRESS/Sean Kilpatrick

OTTAWA - The federal government will provide eight extra weeks of benefits for people whose jobs or earnings have vanished because of the COVID-19 pandemic, but only if they look for work and take jobs when it's reasonable to do so.

The Canada Emergency Response Benefit will continue to pay out $500 a week, but now for up to 24 weeks instead of 16 for people who lost their jobs or saw their hours slashed due to the pandemic.

The first cohort of applicants who signed up in April are set to max out their payment periods in early July, with worries some won't have jobs to go back to and others unable to work because their health is precarious.

“Even as our economy is reopening, there are many, many more people out of work (or) willing to work than there are jobs available and that will be the story for the coming weeks as well,” Prime Minister Justin Trudeau said in announcing the extension.

He added that the government will look at international best practices to determine what further changes will be needed.

At its height, the CERB paid out $17 billion a month when eight million people were on it, but numbers have declined as 1.2 million recipients returned to work or went back on payrolls with help from the federal wage-subsidy program.

The heavy spending from the federal government, along with unprecedented measures from Canada's central bank, have helped stabilize the economy and should support a recovery, Canada's new top central banker told the Commons finance committee later in the day.

“We can't change the fact that the pandemic has resulted in a very severe recession, the most severe in our lifetimes. The best we can do is do everything we can so the bounce-back” takes off, Bank of Canada governor Tiff Macklem said.

“What we really want to avoid is a non-recovery. That will create huge problems and that's why these measures are so important.”

Going forward, the wording of the declaration recipients must make to get CERB payments will include language that applicants are actively looking for work and will take a job offer when their circumstances permit it, similar to the requirements for employment insurance benefits.

Employment Minister Carla Qualtrough said workers with child- or elder-care responsibilities, or those with COVID-19 symptoms, may be unable to work and could keep their CERB access.

“We can't impose an obligation on somebody to take a job,” Qualtrough said, “but we are encouraging and saying that through the attestation, that people actively seek work and take it when it is reasonable in their circumstances to do so.”

Hassan Yussuff, president of the Canadian Labour Congress, warned the language may yet be problematic because job prospects are minimal.

“We are living in a pandemic and we need to take that with some serious understanding that this is going to impact anybody's ability to be actively looking for work,” he said in an interview.

Dan Kelly, president of the Canadian Federation of Independent Business, wrote on Twitter that it was “too soon to end CERB,” but said changes to help workers keep a portion of CERB payments even if they earn more than the $1,000-a-month income cut-off may ease rehiring problems employers say they face.

Quebec Premier Francois Legault, speaking in St-Georges in his province's Beauce region, suggested he would speak with Trudeau about a formula to allow people to collect some CERB while returning to work.

“We understand that those people who have lost their jobs want help from the government,” he said in French, “but we have to find a way where there's still an incentive to relaunch the economy and that the most people possible return to the job as soon as possible.”

An extension will add to the cost of the benefit, but Trudeau didn't provide an estimate Tuesday.

The parliamentary budget officer in a report last week estimated that extending the maximum number of weeks of eligibility from 16 to 28, and extending the program through to January 2021, would cost about $57.9 billion.

Extending the CERB has been a demand from the New Democrats in exchange for the party's support for the minority Liberals in an upcoming confidence vote. Wednesday is to see a House of Commons debate on supplementary spending estimates that detail roughly $81 billion in already approved spending and about $6 billion more in measures requiring approval.

Budget officer Yves Giroux noted in a morning report that a number of measures promised by the government aren't included in the tally, leaving an incomplete picture of how much the government will spend on COVID-19 aid.

Left out of the estimates are cost details on the $45-billion wage subsidy program because it's delivered through the tax system, and a loan program to small- and medium-sized businesses that will open applications to a wider number of companies on Friday.

Giroux warned it will be difficult to get answers about the estimates from federal officials because MPs will only debate the estimates for four hours under a deal agreed to last month by a majority of MPs.

- With files from Morgan Lowrie in Montreal

Prime Minister Justin Trudeau reads a statement regarding small businesses as he addresses Canadians on the COVID-19 pandemic from Rideau Cottage in Ottawa on Thursday, April 16, 2020. Parliament's budget watchdog says the government's $25-billion loan program for businesses impacted by COVID-19 will end up costing federal coffers more than $9 billion. THE CANADIAN PRESS/Sean Kilpatrick