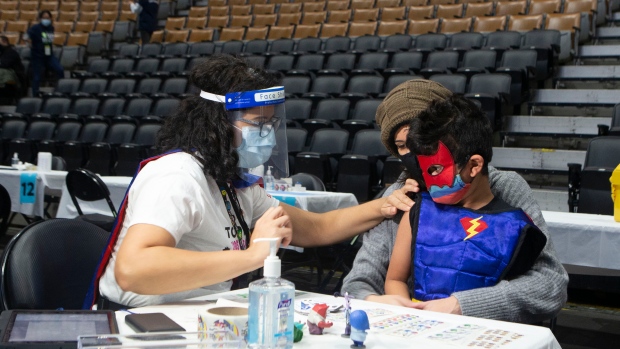 Six-year-old Jaiden Kulkarni sits in his the arms of his mother Neha as he receives his COVID-19 vaccine shot from his aunt Dr. Chetana Kulkarni from Sick Kids Hospital at a children's vaccine clinic held at the Scotiabank Arena, in Toronto, on Sunday, December 12, 2021.THE CANADIAN PRESS/Chris Young

OTTAWA - The timing of the Omicron outbreak in Canada may have hurt the uptake of pediatric vaccines at a time when kids need them most.

Child-sized doses of Pfizer's COVID-19 vaccine were approved for children aged five to 11 on Nov. 19, 2021, and many provinces began injections the following week, just as the first cases of the highly contagious Omicron variant showed up in Canada.

Vaccine hesitancy expert Kate Allen warned early on that parents would be slower to vaccinate their five to 11-year-olds than they were to vaccinate themselves or even their older kids, since parents tend to be more cautious when it comes to young children.

But the vaccine rate is even lower than she expected, even though evidence about the safety of the shot for kids has been positive.

In the two months since they were approved, only 51 per cent of children in that age group have had at least one dose.

That's compared to more than 72 per cent of 12 to 17-year-olds who got at least one jab two months after most provinces began to offer them.

“I think the impression probably that the public health community had was that there'd be a little bit quicker uptake than there has been,” said Allen, a post-doctoral research fellow at Centre for Vaccine Preventable Diseases at the University of Toronto.

One reason could be that provinces starting offering pediatric doses of the vaccine just as the Omicron variant of COVID-19 began to spread.

“I think there was a real focus on that, and so that may have sort of taken away a little bit of attention from sort of five-to-11-year-old population,” Allen said.

That may now be changing.

Last week Prime Minister Justin Trudeau warned that the vaccine rate among children was “too low.”

“We need to do what's right,” Trudeau said at a press briefing last week. “That means getting our kids vaccinated.”

Several setbacks could be chalked up to the poor timing of the Omicron wave, including pandemic fatigue said pediatric infectious disease expert Dr. Jim Kellner, who sits on the COVID-19 Immunity Taskforce.

While governments focused on offering boosters, many jurisdictions have not put enough emphasis on making sure pediatric doses are accessible to families, he said.

In Alberta for example, where the rate of vaccination among kids is lowest in the country at 42 per cent, the province has relied mainly on mass vaccine clinics, he said.

Kellner and Allen agree allowing kids to get their shots from a family doctor or pharmacy and offering more mobile and school clinics could go a long way to make the vaccines more accessible.

A change in messaging may also be in order, Kellner said.

Many parents are under the impression that contracting Omicron is unavoidable, that a vaccine will no longer prevent transmission and that, since kids are at a lower risk in the first place, there is little point in putting them through the ordeal of getting a needle.

But Omicron has led to a surge in hospitalizations among younger kids across the country, and vaccines could prevent the worst outcomes, Kellner said.

While young kids account for less than two per cent of COVID-19-related hospitalizations, the total number of people needing care has skyrocketed to 10,588 as of Jan. 17.

That means more and more kids have wound up very sick.

“These kids are sick enough to have to come into hospital,” he said.

While some kids are particularly vulnerable because they have underlying conditions, that's not the case for all who end up in a hospital bed. Kellner said it's difficult to predict which ones will be hardest hit.

Until now, public health officials and politicians have reinforced the message that people must get vaccinated to protect their communities. But Kellner said that focus should change.

“The main reason for a child to be vaccinated is for the parents to protect that child,” he said.

This report by The Canadian Press was first published Jan. 24, 2021.