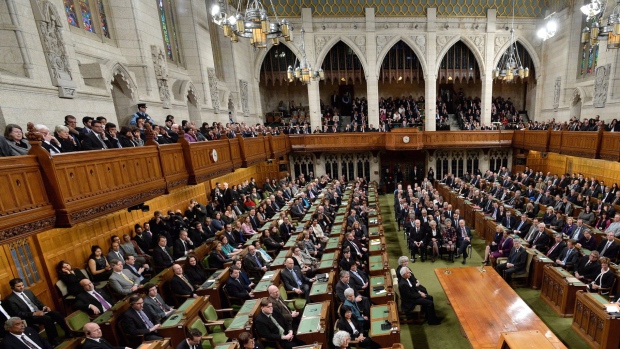 MPs look on in this file photo. THE CANADIAN PRESS/Sean Kilpatrick

Now Kirsty Duncan, minister of science and minister of sport and persons with disabilities, finds herself at the centre of speculation as talk heats up about a cabinet shuffle.

Prime Minister Justin Trudeau will shuffle his cabinet sometime in the next week, sources tell The Canadian Press. Once Trudeau returns later today from the annual NATO leaders' summit in Brussels, his focus will shift to putting the final touches on a Liberal cabinet that will carry his government through to the 2019 election.

Splitting Duncan's duties back into two jobs is expected to be one of the moves, since Trudeau is believed to be planning his first expansion cabinet since taking office, and he needs jobs to give the new faces.

Duncan has been the minister of science since the beginning of the Trudeau government. In January, she was sworn in as minister of sport and persons with disabilities just days after Kent Hehr, her predecessor in that post, was forced to resign from cabinet over harassment allegations from his time as a member of the Alberta legislature.

Trudeau never said how long he expected his science minister to juggle two departments, including two entirely different sets of staff, Duncan said. But she also won't divulge how much longer she intends to keep it up.

"That of course will be up to the prime minister," she said. "I am happy to serve in whatever capacity he sees for me."

She does acknowledge the workload has been dense.

"It's been a very busy seven months," she said, sitting in her main office on the 11th floor of an office tower in downtown Ottawa.

It's an office where the former gymnast and marathon runner is often found exchanging her professional pumps for running shoes, working out with her kettlebells while her staff brief her -- she concentrates better when she is in motion, she insists.

Just before she took on Hehr's files, Duncan was already facing the biggest budget of her political career, one where the government's big talk about respecting science and evidence was going to get its day. The $4-billion investments -- research, laboratory infrastructure, data and computing -- are her prime focus in the Science portfolio.

In her new role, she has implemented new abuse and harassment prevention policies for Canada's athletes and put the finishing touches on the first-ever bill to enshrine accessibility requirements into law, legislation that was tabled in June.

That legislation, the top priority in the mandate letter for the minister of sport, needs to pass before the election and shepherding it through the parliamentary process could benefit from having a minister without a distracted focus divided between two portfolios.

While Duncan has no complaints about the added responsibilities, there is no doubt she has been stretched.

In just seven months, she's been overseas four times: twice to South Korea for the Olympics and Paralympics, once to India with the prime minister to promote science ties with Indian researchers, and once to the U.K. to learn about Britain's Athena SWAN charter, which works to advance the role of women in science, math, engineering and technology.

Next week, Duncan is to start consultations in Quebec about adopting the program here. Promoting women in science is tailor-made for Duncan, who spent 25 years as a researcher and professor in medical geography and environmental science before turning to politics. She knows from her own experience the discrimination women in the field continue to face.

"I don't ever want to hear again that, 'When I went into my prof's office to get a mark, I was asked to twirl,"' she said.

Her tenure in the science file has included making research funding contingent on finding more women, visible minorities, Indigenous scientists and people with disabilities for prominent roles. She described being appalled to learn only one of the 27 Canada Excellence Research Chairs was a woman, a program worth up to $10 million per position over seven years.

Since the new funding requirements were added a little over a year ago, every university came up with an equity plan, and when the newest research chair program, the Canada 150 chairs, started rolling out, 52 per cent of the nominees from the universities were female.

"That is a real change," said Duncan.

Last month, federal funding for national sporting organizations was tied to meeting new policies to prevent athlete abuse and harassment. In the past, lip service has been paid to diversity, but experience has shown that change comes very slowly, and that incentives work better when they have penalties alongside.

"How many decades do we have to wait to have equality?" asked Duncan, who acknowledged that her push to impose new equity policies haven't always been met with open arms.

"I made this a priority when I came in. And people said, 'Ooooh, you can't touch this.' And I said, 'You can't ask me to take on this role and not touch this."'