TORONTO -- The loyalties of craft beer aficionados were put to the test Friday with the announcement that Mill Street Brewery, one of Canada's leading makers of craft beer, is being swallowed by the world's largest brewing company.

Under the agreement, privately held Mill Street is to be taken over by Labatt Breweries, a subsidiary of Belgian-based Anheuser-Busch InBev -- a prospect that has raised concern among some of the company's longtime customers.

This is Labatt's sixth acquisition of a North American craft brewer since 2011 and the deal immediately raised questions about how to define craft breweries in a multinational industry that's purposely making the boundaries murkier than ever.

Mill Street will continue to operate as a stand-alone company as it looks for ways to expand production and capacity, said co-founder Steve Abrams.

Over the past few years, the craft brewer has seen average sales growth of more than 15 per cent annually.

"Many craft brewers in Ontario are experiencing this huge surge just to keep up with demand," Abrams said in an interview.

"This immediate infusion of capital will assist us in getting tanks and more equipment."

However, those aspirations may not sit well with craft beer drinkers, who pride themselves in supporting local products made in small batches.

Some of them quickly took to Twitter to express dismay over the future of the Mill Street brand.

"Goodbye to craft. Hello average," posted @Simmsation on Twitter shortly after the announcement was made.

"Oh no! What a shame, I liked Tankhouse. I need to find a new beer," added @nfitz1, referring to one of the company's trademark brews.

Others decided to take a more creative approach, considering ways that Labatt could mesh its Labatt Blue line with the Mill Street reputation.

"Might I suggest 'Mill Street Blues' as their first hybrid ale?" said @jeremysale.

Mill Street itself will also lose some of its support from the Ontario government under the province's initiative to help grow the market share of craft brewers.

While Mill Street will still be considered a craft brewer, it will not be a "small brewer," which strips it of certain benefits, said a spokeswoman for Finance Minister Charles Sousa.

Press secretary Kelsey Ingram said in an email that Mill Street "will now be treated as any other Labatt-owned brand," which includes bumping Mill Street from the Ontario craft section of the LCBO and eliminating the favoured marketing support given to smaller players.

Meanwhile, beer drinkers will be cautious about assurances that Mill Street won't change under the rule of a global brewer with a reputation for sweeping cost reductions to stay competitive.

Labatt bought discount beermaker Lakeport Brewery in 2007 when "buck a beer" was all the rage, and then shut down its Hamilton facility three years later after deciding it was cheaper to fold production into Labatt's operations in London, Ont.

While Labatt didn't announce how much it will pay for Mill Street, it plans to invest $10 million into the company's existing brewery operations, which it says will remain open.

"We think that this partnership will really help expand awareness of craft across the country," said Charlie Angelakos, Labatt's vice-president of corporate affairs.

The popularity of craft breweries has been on the rise across Canada for years. While overall beer consumption declined by six per cent in 2014, craft beer servings grew by seven per cent, according to recent findings from data research company NPD Group.

Stephen Beaumont, an industry watcher and author on beer trends, said the takeover didn't come as a surprise because of the international buying spree for craft brewers at Anheuser-Busch InBev.

Labatt has also played in the craft brew market itself, under a relatively low profile, positioning its Shock Top line of beers in the microbrew department at liquor stores.

Despite its reputation, Mill Street isn't a stranger to corporate partnerships either.

The brewery opened a branded pub at Pearson Airport in Toronto three years ago, and paired with hotel chain Fairmont for a honey ale named after the company's Royal York Hotel, because it harvested from beehives on the building's rooftop.

"They will likely face a good deal of blow-back from the craft community, for all that relatively small percentage of the market means," Beaumont said.

"I don't think (Mill Street) will change their beers, but for a lot of people the cachet of buying craft beer will be lost."

Mill Street was started in 2002 with modest aspirations by its three founders, but its success pushed them to move its facilities to a larger space four years later that could handle rising demand.

Since then, it has amassed a variety of accolades, including Canadian brewery of the year at Canadian Brewing Awards for three consecutive years starting in 2007.

Labatt -- once an independent giant in Canada's beer industry -- was bought in 1995 by a Belgian group that has continued to grow by buying and merging with other companies around the world. The group, now called Anheuser-Busch InBev, is currently attempting to buy the world's second-biggest beermaker SABMiller.

The founders of Mill Street are hopeful that despite early criticism, their beers will reach new markets, starting with Quebec -- the only province that currently doesn't have any distribution of the brand. 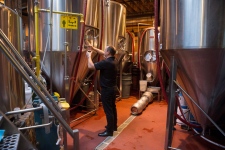