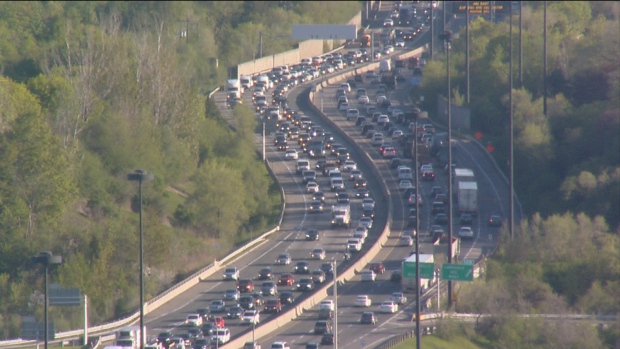 It is going to be a difficult summer for drivers who use the Don Valley Parkway to get around.

The city will begin rehabilitation work on four bridges over the busy highway as of July 2 – Don Mills Road, Spanbridge Road, Wynford Drive and Lawrence Avenue.

As a result of the work, the bridges will be reduced to two lanes in each direction during peak travel times and potentially fewer lanes at other times. There will also be lane restrictions on the expressway until October.

“I would advise that motorists plan their trips accordingly. This is going to be hugely disruptive,” warned Toronto’s Chief Engineer Michael D'Andrea during an interview with CP24 on Friday morning.

The work on the bridges is being completed in four phases.

The first phase, which is expected to run until mid to late August, will see the northbound passing lane on the DVP fully closed from Don Mills Road to Lawrence Avenue East and the southbound passing lane closed at Lawrence Avenue East and Don Mills Road. The northbound and southbound HOV lanes will also be closed from Wynford Drive to St. Dennis Drive.

The second phase will then see two northbound and southbound lanes on the DVP closed overnight for eight nights at the Don Mills Road Bridge.

“Our objective is to get work completed by early October. There has been an awful lot of planning and we are confident we will be able to do that,” D'Andrea said.

D'Andrea said that the work has been in the city’s plans for several years.

He said that there are “urgent” repairs that need to be made to the Don Mills Bridge. The repairs on the three other bridges could have been pushed back, he said, but staff ultimately decided that it would be better to bundle the work to reduce the overall impact on drivers.

“Doing all four bridges now while problematic and challenging for us reduces the overall impact in the future,” he said.