A large swath of Peel Region will experience garbage pickup delays and a complete suspension of recycling collection after workers at a waste management firm went on strike.

Up to 200 workers at Emterra Environmental walked off the job on Monday morning after voting down management’s latest offer.

The workers tell CP24 they are upset with management over working conditions, poor uniforms, PPE and compensation.

The strike impacts residents living in the southwest portion of Mississauga, the western half of Brampton and all of Caledon.

“All we are asking is for the same deal that the other provider who does a third of the region gets,” Jason Ottey, who is a spokesperson for LIUNA Local 183, told CP24 on Monday morning. “We would like to see the same for us, we don’t think it is unreasonable to ask for that because the other provider who has a smaller contract is paying their employees far more than us. So we would just ask for the public’s patience and understanding at this time. We understand that this disruption will be incredibly disruptive for their lives but these are our members lives and they are working just as hard as well.” 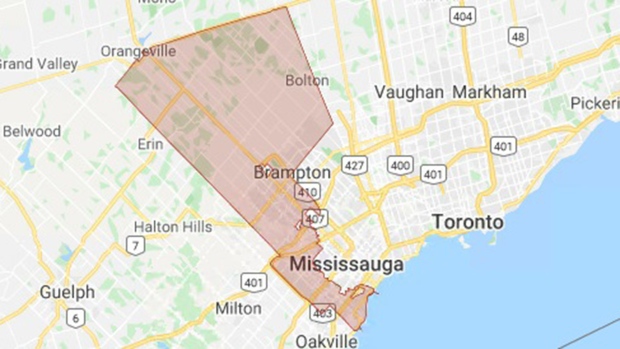 The Region of Peel says garbage and organic waste will continue to be picked up, but on a delayed timeframe.

Recycling and bulky items will not be picked up at this time, nor will yard waste.

“I'm not overly concerned,” Director of Waste Management at the Region of Peel Norman Lee told CP24 on Monday afternoon. “There are contingencies in place, the contractor, they will be picking up some of the waste, they're trying their best to pick up garbage and green bin material which, of course, is the smelliest material. We are asking residents to hold on to recycling and yard waste until the labor disruption ends.”

Lee told CP24 that he is hopeful that the two sides can reach a deal in the “near future” and that the labour dispute “doesn’t drag on too long.”

But he said that he is uncertain how far apart the two sides are, as Peel Region will not be getting involved in the negotiations between a private company and its employees.

“We continue to monitor the situation and we will make decisions as appropriate,” he said. “There could be changes (to services). The longer this goes on the more changes we will probably see.”

In a statement issued through the Region of Peel earlier on Monday, Emterra urged the leadership of LIUNA Local 183 to reconsider the strike action, which it said came despite the tabling of a “fair and competitive, fully recommended deal.”

But the spokesperson for the local told CP24 that Emterra has refused to put forth a “fair deal” so far.

“Going on strike is obviously the last resort, it is not something we wanted to do,” he said.