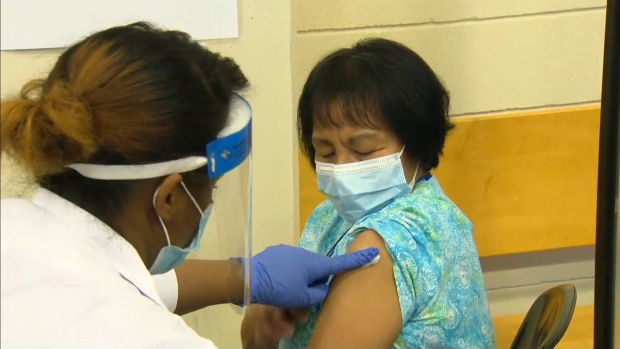 Personal support worker Anita Quidangen is shown receiving her second dose of the Pfizer-BioNTech COVID-19 vaccine on Monday. She is the first person in Ontario to receive both doses.

A large COVID-19 vaccination clinic will open up inside a downtown convention centre next week as officials step up their efforts to prepare for the mass vaccinations that are slated to take place at multiple sites across the city this spring.

Until now COVID-19 vaccines have only been administered at 19 hospital sites across Ontario but the city has agreed to open a clinic inside the Metro Toronto Convention Centre on Jan. 18 in order to help develop a blueprint for how shots could be administered in non-medical settings as soon as this spring.

Fire Chief Matthew Pegg, who is the city’s COVID-19 incident commander, said that 250 doses of the COVID-19 vaccine will be administered at the clinic each day but he pointed out that the facility will be “scalable” and that “the scope of operations can be increased quickly” should the availability of the vaccine improve.

Pegg said that the plan right now is for the clinic to operate for at least six weeks, at which point officials will use the lessons learned from the experience to create a “playbook” that will inform efforts to open additional mass vaccination facilities in Toronto and elsewhere in Ontario.

“This is critical work that must be completed in order for COVID-19 immunization clinics to be launched both across Toronto and across the province moving forward,” he said during a briefing at city hall on Monday afternoon.

That, in turn, would create the need for a series of mass vaccination sites like the one proposed for the MTCC.

Pegg said that there will eventually be multiple sites at “large public facilities” across the city and that work is ongoing right now “to finalize” the location.

He said that there are also plans for mobile clinics and “priority neighbourhood response teams as part of the city’s broader vaccination strategy.

“Developing, launching and operating an immunization campaign of this scope and magnitude is a massive undertaking. This includes numerous facilities and logistics plans, staffing plans, security and safety plans and all of the operating procedures and medical oversight that are required,” he said in explaining the need to open the MTCC facility now, weeks ahead of schedule.

News of the opening of the city’s first mass vaccination clinic comes as COVID-19 cases continue to surge in the city.

On Monday, Toronto Public Health reported another 978 new cases of COVID-19 as well as another 14 deaths. There are also 433 in hospital with the virus, including 115 in the ICU.

“We have some hard truths to face. Our data shows us that COVID-19 is now spreading at levels so serious that it is hard to describe,” Toronto Medical Officer of Health Dr. Eileen de Villa said during a briefing at city hall. “What we are seeing now is the consequence of too many people spending too much time together in December and particularly during the holidays. It is not fair that someone should die from COVID because the rest of us didn’t try hard enough to avoid it.”

The city has said that the vaccination clinic at the Metro Toronto Convention Centre will be open from 11 a.m. to 8 p.m., seven days a week.

It will focus on vaccinating frontline healthcare workers, including those working in the city’s shelter system and as harm reduction workers.