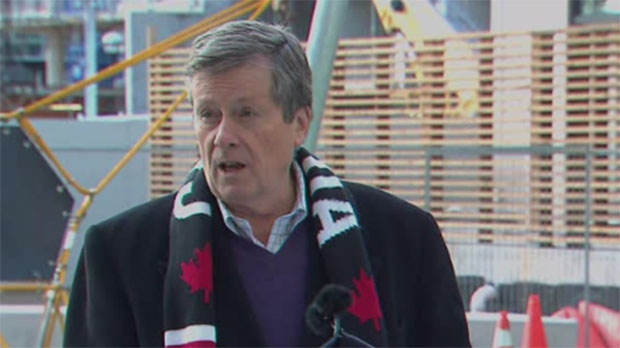 Mayor John Tory attends a ribbon-cutting ceremony for the latest building completed as part of the ongoing revitalization of Regent Park.

Work has been completed on the latest building that is part of the ongoing revitalization of Regent Park, a project that includes more than 150 badly-needed affordable units.

Mayor John Tory, city councillor Kristyn-Wong Tam and several other dignitaries were on hand on Sunday morning as a ribbon-cutting ceremony was held to mark the completion of 150 River Street.

The building includes 125 rent-geared-to-income units and 33 below-market affordable units, some of which residents will begin occupying as soon as this week.

It is just the latest project to be completed in the redevelopment of Regent Park, which began in 2006. Once fully complete, the mixed-use neighbourhood will have 2,000 rent-geared-to-income units, 400 below-market affordable units and 5,400 market-rate units.

“This is a brand new mixed-income; mixed-use community here in Regent Park and that is what we are trying to do over and over again across the city,” Tory told reporters prior to the official ribbon cutting. “It takes a community that had narrow streets and was closed off almost by design with very few amenities for the residents and transforms it into something that is a community that is mixed income and has amenities that are of the quality that you would expect for any neighbourhood in the city.”

Tory said that the revitalization of Regent Park, which has been completed in partnership with the Daniels Corporation, has been an example “of how we can do things better.”

Though much work remains, he said that the neighbourhood that is starting to form is “a vibrant community where people will be able to thrive.”

“I often have people on tours from outside of Toronto and one of the things that I take pride in is I have them stand in front of any selection of three buildings that are part of the revitalization here and say ‘Tell me which ones are TCHC and which ones are market rental or market condominium?’ and the fact is that thanks to the quality with which every part of this has been done they can’t tell the difference,” he said. “That’s the whole idea. People should be all living together in one city and one community.”